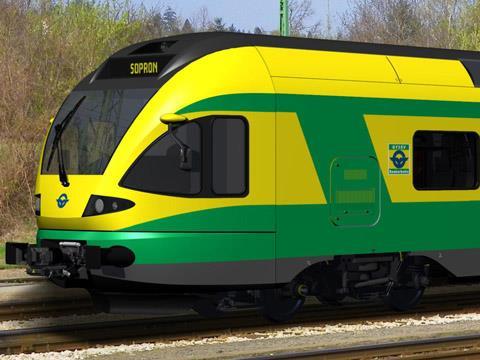 The European Union's Cohesion Fund is meeting 85% of the €20·3m cost of the contract which was signed on April 13. The bodyshells are to be produced at Stadler's Szolnok plant, with deliveries scheduled to run from early to mid-2014.

The low-floor Flirt EMUs will be similar to units which Stadler has supplied to national operator MÁV, with 200 seats and space for 164 standing passengers. They will have modern passenger information systems, air-conditioning, accessible toilets and multifunction spaces for bicycles. Top speed will be 160 km/h, with acceleration of 1·1 m/s2 and regenerative braking capability.

GySEV operates passenger and freight services in western Hungary and eastern Austria. It is jointly owned by the governments of Hungary (65·6%) and Austria (28·2%), with Strabag having a 6·1% stake. It took over the Sopron - Szombathely line in 2001, and has leased Szombathely - Szentgotthárd from MÁV since 2006.

A modernisation and electrification programme for the route was launched in 2009, with the EU meeting 85% of the HF48·6bn cost. Track renewals and electrification were completed late last year, enabling higher speeds. Bridges are to be built to replace level crossings in Szombathely in Sopron.