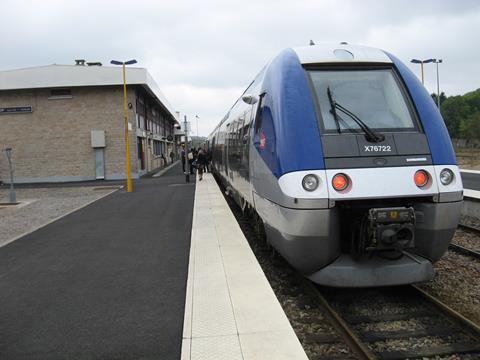 FRANCE: Following a year of consultation over the competitive tendering of up to 10 groups of local rail services, the Hauts-de-France regional council formally invited expressions of interest on July 30 for three nine-year public service contracts to operate routes in Nord-Pas de Calais and Picardie.

The largest of the three covers a ‘star’ network of TER services radiating from Amiens to Abancourt and Rouen, Abbeville, Albert, Saint-Quentin, Laon, Compiègne and Creil, plus the Creil – Beauvais, Beauvais – Le Tréport, Abbeville – Le Tréport and Laon – Hirson routes. These require the operation of an estimated 3·4 million train-km per year.

Valued at €820m, this package envisages that operations would start from December 10 2023, following an 18 month mobilisation period, and run to December 2032. Reinstatement of services on the Abbeville – Le Tréport line, which were suspended due to the condition of the infrastructure, is covered by a contract option to be exercised at the discretion of the regional council.

All three packages include provision for the operation of buses to complement or replace the trains; in the case of the Saint-Pol-sur-Ternoise ‘star’, this includes regular bus services on the route to Béthune. The operating concessionaires will have to liaise with national infrastructure manager SNCF Réseau over path allocation, access to stations and other interfaces.

In all cases, Hauts-de-France will make the rolling stock available; recent builds have been procured by SNCF to regional specifications and at the region’s expense. Financial support may be provided if it is felt appropriate to invest in additional stock. Servicing and maintenance would become the responsibility of the operator. The Amiens tender includes the necessary maintenance facilities; the other two tenders include an option covering the construction of separate maintenance facilities to be exercised at the region’s discretion. The depots would remain the property of the region and be leased to the operators.

The concessionaires would be responsible for marketing, passenger information and fare collection, including the selling and checking of tickets, in line with a fares policy set by the region. They would be expected to participate in initiatives to develop greater multimodality in local public transport.

The Saint-Pol package includes further options covering the maintenance of infrastructure and stations, which may be exercised following an express decision of the regional council. This would allow for any future transfer of responsibility for selected local lines to regional control in the light of experience with the schemes now being piloted in Grand Est.

In the case of the Beauvais – Paris route, candidates are invited to submit a second offer outlining options for reducing the end-to-end journey time for selected services to under 1 h, as well as their standard bid.

The 18 month mobilisation periods envisaged for each package would provide time for preparations including the transfer of staff and the handing over of assets. Staff transfers would be in line with French legislation on conditions of employment, and the Amiens package is expected to see the transfer of up to 600 employees. An extra six months would be added to the mobilisation period for the Saint-Pol and Beauvais contracts in the event that the option to develop a maintenance depot is exercised, although the start date for operations would remain July 7 2024.

Initial offers are required by October 21, after which an invitation to tender will be issued to shortlisted applicants, which could include individual companies or consortia providing that they hold the necessary operating licence and safety certification. The region is expected to select its preferred bidders and finalise the contracts by mid-2022 to allow time for the necessary mobilisation periods.