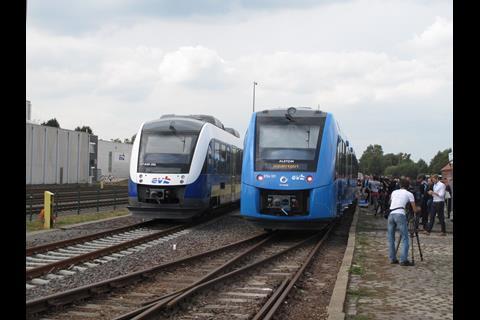 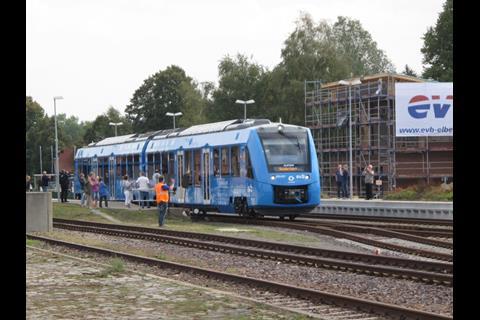 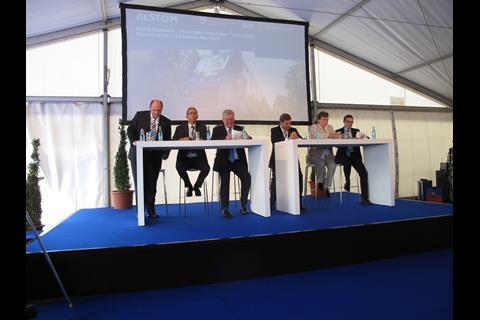 Hailed by the manufacturer as the world’s first fuel cell trains, the Salzgitter-built iLints will be operating on 100 route-km of the Elbe-Weser network between Cuxhaven, Bremerhaven, Bremervörde and Buxtehude, replacing older diesel trains. They are designed to operate at speeds up to 140 km/h.

The roof-mounted hydrogen tanks give the trains a range of around 1 000 km, sufficient for a day’s operation. At present, the prototype trains are being refuelled using a mobile filling station at Bremervörde, where the hydrogen gas is pumped from a steel container next to the tracks at Bremervörde station. A permanent filling station is to be built at the EVB depot by 2021, when Alstom is due to deliver a further 14 iLints to LNVG under a contract awarded in November 2017. LNVG Managing Director Carmen Schwabl said that up to 120 diesel trainsets used on regional services in Niedersachsen would be coming up for renewal in the next few years.

‘With the test operation starting today, Niedersachsen is performing real pioneering work in local transport in co-operation with Alstom and EVB’, said Land Minister of Economy & Transport Bernd Althusmann. ‘In successfully proving the operability of the fuel cell technology in daily service, we will set the course for rail transport to be largely operated climate-friendly and emission-free in the future.’

According to federal State Secretary for Transport & Digital Infrastructure and Commissioner for Rail Transport Enak Ferlemann, Federal Government, the development of fuel cell technology is ‘a strong sign for the mobility of the future’ as an efficient alternative to diesel. The federal government has been actively supported the development with funding from the National Innovation Programme for Hydrogen & Fuel Cell Technology.