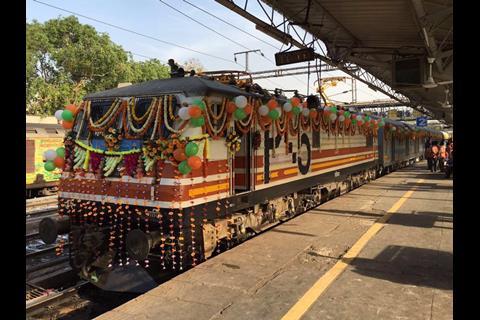 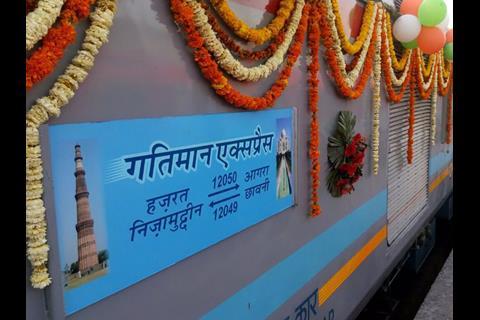 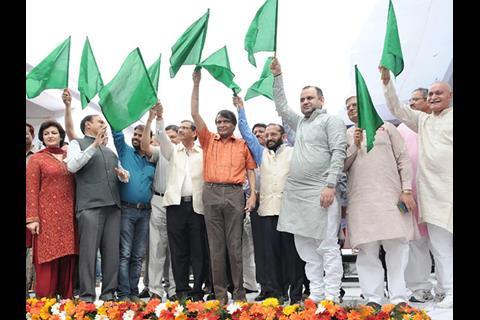 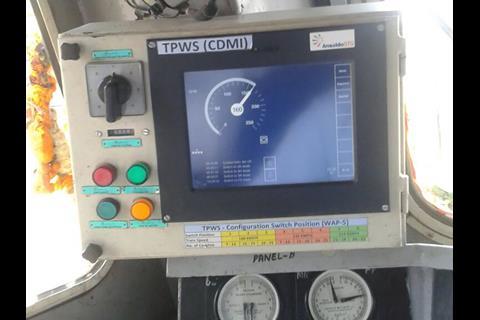 INDIA: What the ministry describes as India’s ‘first semi-high speed train’ was launched by Minister of Railways Suresh Prabhu on April 5. The Gatimaan Express between Delhi’s Hazrat Nizamuddin station and Agra Cantonment is now the fastest train India, running at up to 160 km/h to give a journey time of 1 h 40 min on the 188 km route, compared to a previous fastest time of more than 2 h hh.

Prabhu had set out plans to introduce ‘semi high speed’ trains on the corridors between Chennai, Kolkata, Delhi and Mumbai when he presented the annual railway budget on February 25. The aim is to increase the average speed of Mail and Express trains to 80 km/h.

The acceleration of the Gatimaan Express has been achieved through better traffic management, running non-stop and using Hazrat Nizamuddin rather than the busier New Delhi station.

The train runs every day except Friday, departing from Hazrat Nizamuddin at 08.10 and Agra Cantonment at 17.50. It is hauled by a WAP-5 electric locomotive, and comprises two Executive AC Chair and eight AC Chair coaches which were produced by the Rail Coach Factory in Kapurthala. These LHB-type coaches have modified couplers to ensure a smooth ride at 160 km/h, and feature biotoilets with improved washing facilities, a new livery and internal decorations based on historical sites in Delhi and Agra.

Onboard catering is provided by Indian Railways Catering & Tourism Corp, which offers tours of Agra timesd to meet the trains. MyFreeTV provides free videos over wi-fi which passengers can watch on mobile devices.