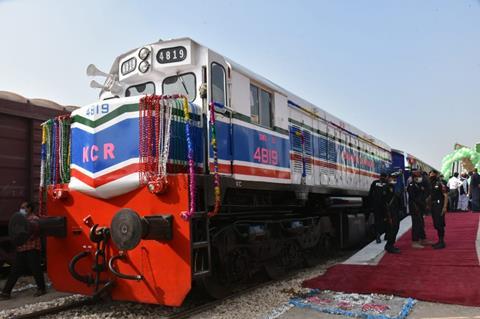 PAKISTAN: The long-proposed resumption of services on part of the Karachi Circular Railway was celebrated with an inaugural train on November 19.

Pakistan Railways has reinstated a passenger service on an initial 14 km of the 55 km orbital route around the city, with was developed in the 1960s to facilitate travel between residential, industrial, business and educational areas. Ridership on the KCR peaked at six million passengers/year, before a deterioration in services, a culture of fare evasion and accusations of corruption involving competing road transport operators led to unsustainable losses. Services ceased in 1999. 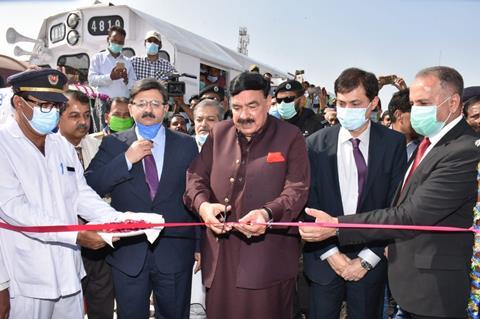 Plans for revival have been under discussion for many years, and recently made progress with government funding allocated for infrastructure rehabilitation and powers obtained for the removal of encroachments onto the alignment.

There will initially be four trains each way per day, with departures from Orangi at 06.30, 10.00, 13.00 and 16.00 running to Manghopir, SITE, Shah Abdul Latif, Baldia, Lyari, Wazir Mansion and Karachi City. From Karachi City the trains continue over the main line to Pipri Marshalling Yard, where the 06.30 train is scheduled to arrive at 09.15; speeds on the reopened section of line are extremely low, with manual controls causing delays at level crossings.

The single fare is Rs30 and monthly season tickets are available for Rs750.

Phase 2 of the reopening would cover the Orangi to Gilani section of the loop, where part of the alignment has been used for a busway. Phase 3 would complete the circuit around the city by reopening the section between Gilani and the main line at Drigh Colony.

The government has allocated Rs1·8bn for the KCR revival project, of which Rs17m has so far been spent on clearing the first part of the route and refurbishing coaches at the Islamabad workshop. The coaches have been repainted in a white, blue and red livery to distinguish them from inter-city trains. Each coach has a capacity of 64 seated and 36 standing passengers. Speaking at the inauguration, Minister for Railways Sheikh Rashid said he had hoped to replace the coaches, but three tenders only attracted one bid. 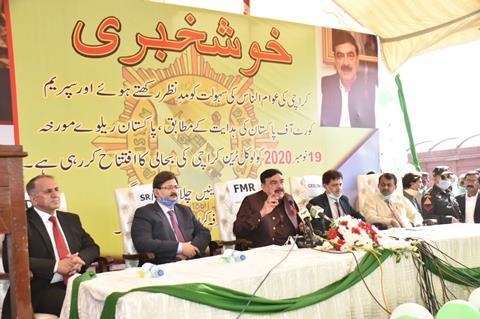 The minister said the full route would be modernised within a year, but the Sindh province’s government needs to regain control of the alignment to allow work to progress.

He also said that PR was ready to hand over the KCR to a private operator once reopening was completed.

‘We are going to do lots of work on the railways, and God willing we will try to reduce the problems of Karachi’, he said.

Pakistan Railways Chairman Dr Habib Ur Rehman Gilani told local media that the ambition was to enable trains to run at 80 km/h on the route with fencing on both sides of the track and the elimination of crossings. He envisaged that this could be completed in 2½ years, using private financing through a PPP agreement.