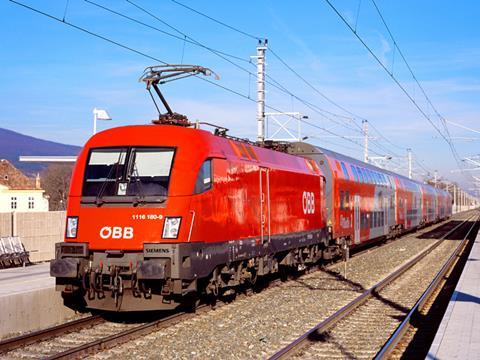 Total revenue of €6 345m was slightly lower than 2014, with EBT of €192·8m, up from €171·7m the previous year. Costs were being kept in check, he said, while rising passenger traffic had generated €230m of revenue. Financial Director Josef Halbmayr described the group’s performance as ‘stable and healthy’.

ÖBB’s trains carried 238 million passengers, of which 34·3 million were long-distance trips, a rise of 2%. The freight business had experienced a ‘brutal’ year with 33 rival operators competing for traffic: Rail Cargo Group carried 82·4 million tonnes of domestic traffic, 1·4% less than in 2014, and 54 million tonnes on services outside Austria, an increase of 5·5%.

In his presentation Kern highlighted ÖBB’s plans to invest in new rolling stock. This included overnight services, where traffic growing at the rate of 4% a year made it ‘an attractive business’, and ÖBB is to invest €230m in new trains for overnight services from Austrian cities to Roma, Milano and Venezia.

A 200 km/h replacement fleet would be built for Brenner route daytime services by 2020 at a cost of €160m. Another nine Siemens Railjets would be added to the inter-city fleet by the end of 2016, with 101 Desiro Cityjet multiple-units for local services delivered by the end of 2017. New locomotives would also be acquired for freight operations.

Under its Focus 2020 programme, ÖBB has set targets of carrying 500 million passengers a year and 150 million tonnes of freight by 2020.