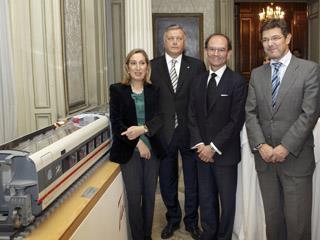 This covers the design, assembly and testing of three gauge-changing trainsets for the Moscow - Berlin route, as well as four 200 km/h trainsets to operate between Moscow and Kyiv.

The agreement was signed in Madrid in the presence of Spain's new Development Minister Ana Pastor, who described it as 'a further step in the already long and fruitful partnership between Spain and Russia in the field of railways'. She also signalled Spain's willingness to bid for contracts to build the high speed line between Moscow and St Petersburg, 'given our obvious experience and capability'.