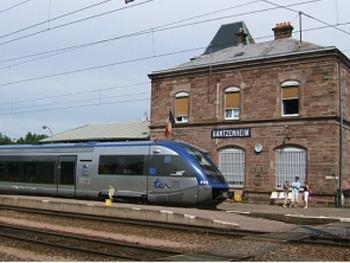 EUROPE: SNCF began operating regular passenger services between Mulhouse in France and Müllheim in Germany with the December 9 timetable change, following the completion of a programme to upgrade the 17·5 km freight route between Mulhouse and the border at Chalampé.

There are now seven TER services each weekday between Mulhouse and Müllheim, where connections are available to Freiburg-im-Breisgau.

Now served by regular passenger trains for the first time in 29 years, from late August 2013 the Mulhouse - Müllheim route will be used by a daily return TGV service between Paris and Freiburg.