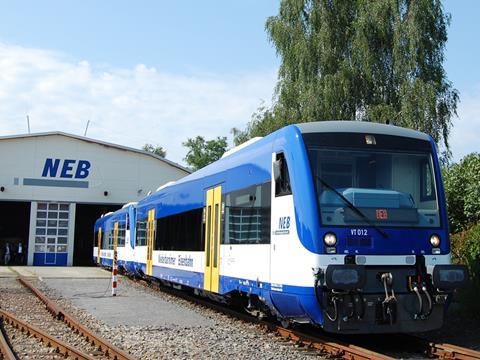 The services on routes north and east of Berlin were tendered as two lots totalling 5 million train-km/year, with NEB named as the winner last year. The contracts run to December 2024, and include various quality and safety improvements. All trains will have passenger-facing onboard staff, and NEB is required to take on employees from incumbent operator ODEG.

The first contract starts in December 2014 and covers services which will be operated using Regio-Shuttle RS1 railcars leased from Alpha Trains. These are being modernised by Euromaint, with the installation of CCTV, power sockets and passenger information systems which will provide real-time information about bus, tram and U-Bahn connections. This is intended to offer a high-quality environment without requiring new rolling stock.

NEG will take over the second batch of services in December 2015. These routes will be operated using three-car Bombardier Talent diesel multiple-units and Pesa Link DMUs which are on order. The optimal deployment of the single-car and three-car units is expected to bring cost savings across the network.