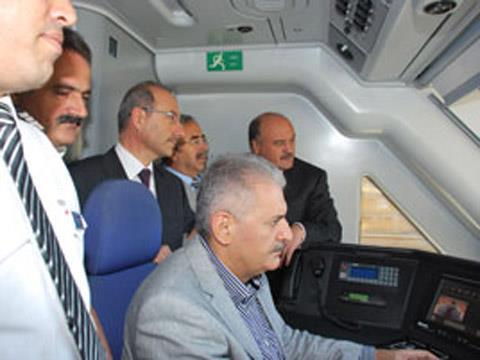 Built at a cost of YTL1bn, the north-south line completes a strategic link in the rail network. Taking the direct 306 km route instead of the previous uncompetitive 688 km circuitous route via Afyon cuts Ankara - Konya journey times from 10½ h to 1½ h. TCDD plans to accelerate its initial timings to save a further 15 min, and increase the service from 10 trains/day to hourly to meet predicted demand.

The first 94 km of the new route shares the Ankara - Eskisehir fast line, branching off at a triangular junction in Polatli to run 212 km to Konya, with seven major bridges, 83 road under and over bridges, 2 030 m of tunnel and a parallel road for security purposes.

Work on the fast line from Eskisehir to Gebze outside Istanbul and the 466 km Ankara - Sivas line is now to be accelerated, with completion envisaged within three years.