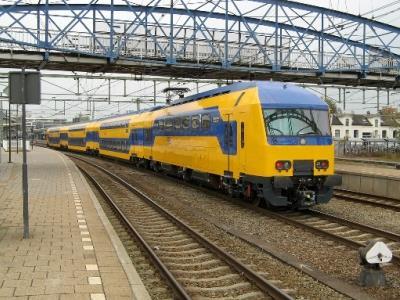 Designated NID, the units are being converted from DD-AR suburban EMUs which had been created in the mid-1990s by merging older double-deck push-pull coaches with purpose-built Bo-Bo-Bo power cars.

The delivery of New Sprinter EMUs created a surplus of suburban rolling stock, whereas NS Reizigers was seeing a growing demand for inter-city travel. Under a €235m contract awarded in 2010, NedTrain is refurbishing 50 power cars and 190 trailer vehicles to form 30 four-car and 20-six car trains; the work is due to be completed by mid-2013.

Taking eight days per coach, the conversion includes a revised interior layout and new seating throughout, reducing the nominal capacity of a four-car set from 475 to 372. New toilets with bioreactors are also being installed, with at least one wheelchair-accessible toilet compartment per train. Wi-fi access is provided throughout, along with power sockets in first class. Full air-conditioning is also being installed in place of the former heating and ventilation system.