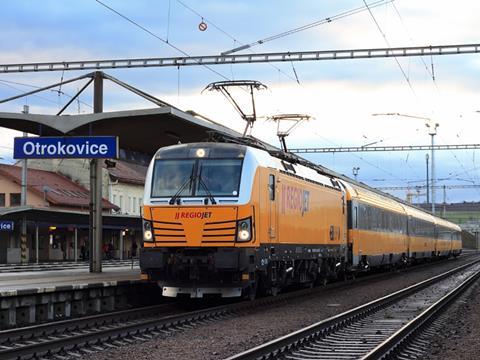 Formerly used on CityNightLine trains, the Type Bvcmz coaches which arrived in late April follow 18 similar vehicles which were acquired in 2019.

After they have been refurbished, RegioJet plans to deploy the couchettes on an international open access service from the Czech capital Praha to Przemyśl in Poland via Czechowice-Dziedzice and Kraków. This is expected to launch with the December 13 timetable change.

The operator had applied to Polish rail authority UTK on February 3 for paths to run one train each way per day. On April 1 UTK allocated it capacity for five years, having determined that the international trains would not affect the profitability of subsidised services.

The train is scheduled to depart from Praha at 22.10, arriving in Przemyśl at 07.30. The return working will leave Przemyśl at 21.00. Formed of eight to 12 Bcmz, Bvcmz and Bvcmbz coaches with a total capacity of 400 to 600 passengers, the train would be hauled throughout by Class 193 Siemens Vectron or Class 386.2 Bombardier Traxx locomotives.

RegioJet had initially intended to run as far as Mostyska on the Polish/Ukrainian border from June.