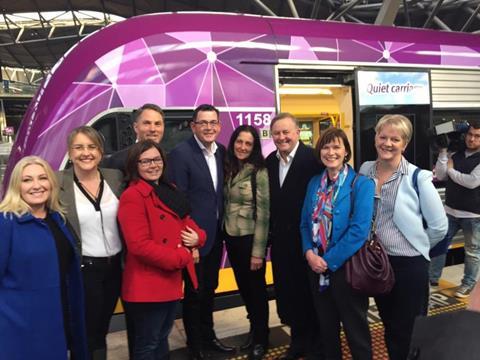 AUSTRALIA: The A$3·65bn Regional Rail Link project in Melbourne was formally inaugurated on June 14, when Deputy Prime Minister and Minister for Infrastructure & Regional Development Warren Truss joined the Premier of Victoria Daniel Andrews and the state’s Minister for Public Transport Jacinta Allan on a special train to mark the opening of the stations at Tarneit and Wyndham Vale.

Described as the state’s first major new railway in 80 years, the Regional Rail Link is intended provide additional capacity into the state capital from the west by segregating V/Line’s regional diesel trains on the routes to Geelong, Ballarat and Bendigo from suburban electric services. The federal government contributed A$2·7bn to the seven-year project, with Victoria funding the remaining A$931m.

The scheme involved the construction of a 160 km/h cut-off between West Werribee and Deer Park, serving the two intermediate stations, and the laying of an additional pair of tracks alongside the existing route from Sunshine through Footscray and North Melbourne to Southern Cross station, where two extra platforms have been built. In total the project required the construction of 90 km of new track, five new or upgraded stations, 13 grade-separated junctions and the removal of two level crossings.

V/Line trains to and from Bendigo and Ballarat began using the additional tracks last year, and trains on the Geelong route will start to use the new link on June 21. Together with the introduction of additional VLocity DMUs, this will allow the operation of regional services to Geelong every 10 min at peak periods.

Truss said that by removing major bottlenecks the Regional Rail Link would significantly increase capacity for passengers across the network. ‘It has also provided an economic boost for Victoria, with an injection of A$1bn annually into the Victorian economy during construction and the creation of 3 500 construction jobs.’

Describing the line as ‘one of the most important projects in Victoria’s history’, Andrews said it was ‘a great example of what can be achieved when federal and state governments work together to deliver major public transport infrastructure.’