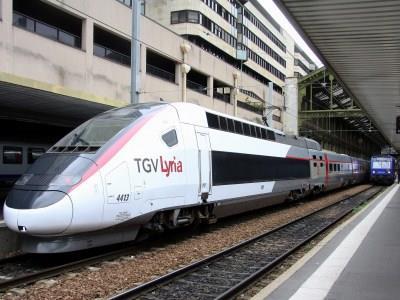 EUROPE: Franco-Swiss train operator Lyria SAS unveiled a new look on September 25, presenting in Paris the first of 19 refurbished TGV POS sets which it is acquiring to operate an expanded range of cross-border services between France and Switzerland.

Originally established as a joint venture between the two state railways, Lyria is now registered as a simplified limited company (société anonyme simplifiée) owned 74% by SNCF and 26% by SBB.

Lyria’s existing fleet of three-system TGV trainsets dating from the opening of LGV Paris - Sud-Est is now around 30 years old, and the company is replacing them with 19 multi-system TGV POS sets dating from 2007. These were developed to work international services over LGV Est by combining new multi-system power cars with refurbished sets of TGV Réseau trailer cars, but have since been superseded by EuroDuplex multi-system double-deck TGVs.

Launch set 4413 on show at Paris-Gare de Lyon on September 25 had received an external repaint into the new Lyria livery, but not yet received the planned interior refresh; all 19 sets are to be refurbished next year.

From the timetable change on December 9, Lyria is to operate all of its services from Gare de Lyon, switching its Basel and Zürich trains from LGV Est to LGV Rhin-Rhône. It will also introduce a weekly ‘Snow Train’ between Lille and Brig, connecting with Eurostar services from and to London. The daily Paris – Bern service via Pontarlier will also be extended to Interlaken at weekends. Lyria will also take over the operation of SNCF’s existing services connecting Genève with Marseille, Nice and Montpellier.