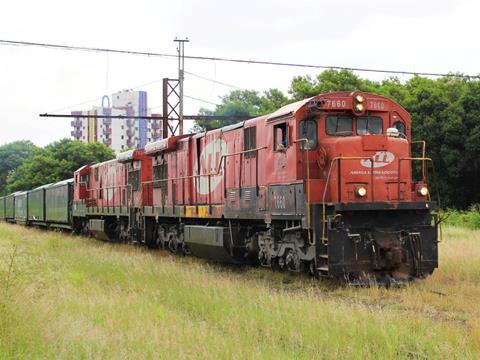 BRAZIL: A state-wide X-shaped network of passenger services could be reintroduced to the main line network in São Paulo under plans being developed by Governor João Doria. The initial service would link São Paulo with Campinas, a distance of around 100 km.

The first corridor runs broadly north-south, linking Americana, Campinas and Jundiaí to the Baixada Santista metropolitan area, centred on Santos, serving a total population of more than 3 million. The second foresees an east-west service linking Sorocaba, a city with a population of 645 000, and São Jose dos Campos (714 000 inhabitants), which could also serve other towns in the Vale do Paraíba conurbation. The two routes would share an alignment through the centre of São Paulo.

While the city of São Paulo has an extensive suburban rail network operated by CPTM, regional and long-distance passenger trains largely disappeared in Brazil in the 1990s under reforms that saw the main line railway privatised under long-term concession agreements with freight companies. These agreements would have to be reviewed and potentially amended to allow the resumption of passenger traffic; the federal government has said that it would be willing to start negotiations with the freight railways, with the first talks due this month.

Operation of the 1 600 mm gauge Jundiaí – Campinas - Americana line was contracted to Rumo for 30 years in 1998. The operator said in March that it had already signed a provisional agreement with the São Paulo state government to facilitate passenger trains between Jundiaí and Campinas when the contract is renewed. The Jundiaí – São Paulo section is already managed by CPTM as part of its Line 7, although freight operator MRS has trackage rights through the city. The winning bidder would to take on the operation of Line 7 as part of the concession.

Governor Doria announced in late May that procurement for a São Paulo - Campinas inter-city service would begin next year. This would see an operating concession worth up to R$7bn awarded to a private consortium which would cover modernisation of the 102 km route to allow a 60 min journey time, as well as rolling stock procurement and operation of the service.

Procurement to develop the second axis between São Paulo and Vale do Paraíba could start in 2021, State Deputy Governor Rodrigo Garcia said in April. There is no timescale yet for the services serving Santos and Sorocaba.