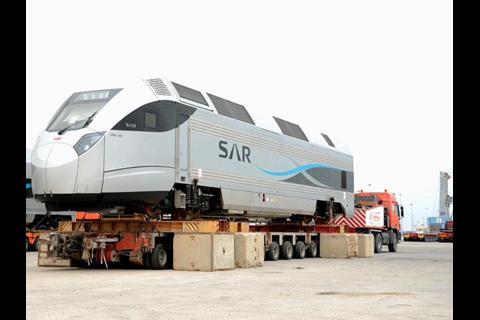 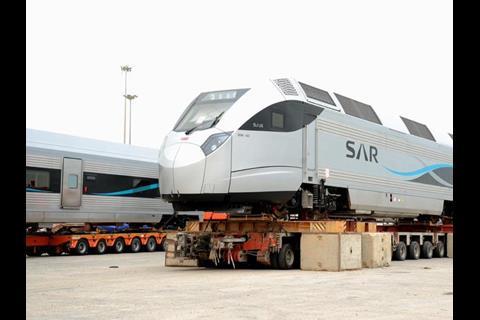 SAUDI ARABIA: The first of five passenger trainsets for the North-South Railway has arrived in the Kingdom, Saudi Railway Co announced on April 27.

Designed for 200 km/h operation in temperatures up to 55°C, the diesel push-pull trainsets are being supplied by CAF under a 533m riyal contract signed in March 2012. Like the four similar sets being supplied to augment the SRO fleet used on the Riyadh – Dammam line, each of the SAR trains includes a restaurant car, family zone and a prayer compartment, as well as both seating and sleeping cars. They are expected to run in formations of nine and 13 cars.

The passenger trains will operate over a 1 418 km route linking Riyadh with Al Qurayyat in the northwest of the country, close to the border with Jordan at Al Haditha. They will use a 500 km mixed-traffic line now under construction from the capital to join the first phase of the North-South Railway at Az Zabirah Junction near Ha’il. After sharing tracks with SAR’s phosphate and bauxite trains as far as Al Jawf, the passenger services will then diverge again on a short branch to reach Al Qurayyat. Intermediate stations are being provided at Majma'a, Qassim, Hail and Al Jawf.

At the time of the contract award, SAR anticipated that the first trains would be delivered within two years. Last year it announced that trial services would begin running ‘in early 2015’.