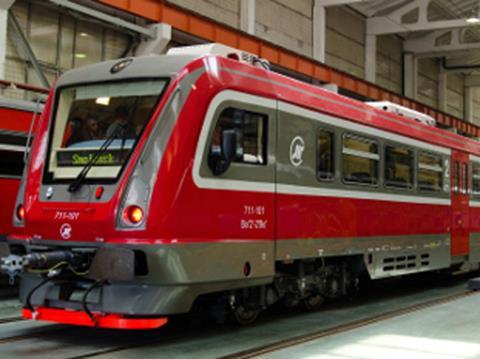 SERBIA: National railway ZS expects to take delivery of the first of 12 two-car diesel multiple-units during September, with entry into traffic by the end of the year. Transmashholding will deliver the remaining 11 units from its Metrovagonmash plant near Moscow during 2012.

Inspecting the first unit at the factory during July, ZS Director General Milovan Markovic said it 'fulfils all the requirements we asked from the manufacturer', and 'is technically very modern and has the latest equipment'.

The design meets 'all national and international standards', with Voith transmissions, Knorr-Bremse brakes, Hübner gangways and Webasto heating and air-conditioning. Intended for use on local and regional services, the 120 km/h units will have passenger information systems, CCTV and 120 seats, with tip-up seats in a multi-functional pram, bicycle and luggage area near the toilet.

The order for 12 units was placed in 2010, partly funded using a SFr43m loan from Eurofima. ZS hopes to use a loan from Russia to acquire a further 28 units. An EBRD-backed tender for 30 main line EMUs and multi-system electric locomotive is also now at the final phase.