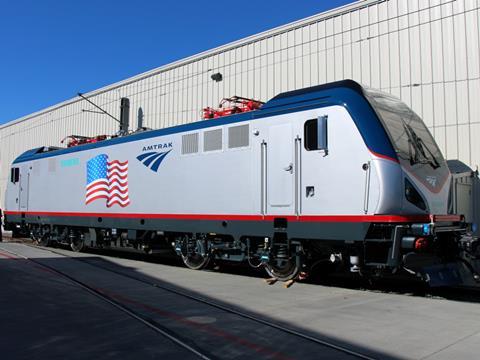 USA: The first of 70 electric locomotives being built to operate Amtrak services in the Northeast Corridor was rolled out at the Siemens plant in Sacramento on May 13.

The locomotive was officially handed over to Amtrak President & CEO Joseph Boardman by the President of Siemens Rail Systems USA Michael Cahill, in a ceremony attended by Deputy Federal Railroad Administrator Karen Hedlund.

Ordered at a cost of US$466m, financed by an FRA loan, the ACS-64 Amtrak Cities Sprinter locomotives are a key component of Amtrak's comprehensive Fleet Strategy Plan. They will haul Northeast Regional trains on the Washington - New York - Boston route at up to 200 km/h and Keystone Service trains between Philadelphia to Harrisburg at up to 177 km/h, as well as long-distance trains using the Northeast Corridor. The new locomotives are intended to replace Amtrak's ageing AEM-7 locos, which have each clocked up between 5·5 and 7 million km over the past 35 years.

Derived from Siemens' modular Vectron family, the 6·4 MW Bo-Bo locomotives are being assembled in Sacramento using parts from the company's plants at Norwood in Ohio, Alpharetta in Georgia and Richland, Mississippi, as well as components supplied by 69 firms across 23 states. The locos will be fitted with regenerative braking, which Amtrak estimates will cut its energy consumption by 3 billion kWh, saving $300m over 20 years.

The first three locomotives are expected to enter service in the autumn, following an extensive testing programme. Two will spend the summer at the Transportation Technology Center in Pueblo, Colorado, with the third running on the Northeast Corridor. Production of the remaining units will then ramp up, with deliveries running at one loco a month until 2016.

'The new Amtrak locomotives will help power the economic future of the Northeast region, provide more reliable and efficient service for passengers and support the rebirth of rail manufacturing in America', said Boardman. Hedlund added that the investment would create and preserve jobs 'in 60 cities across the country'.