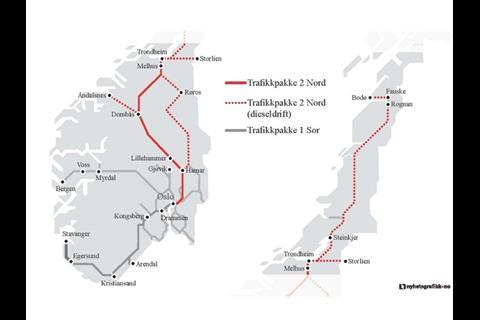 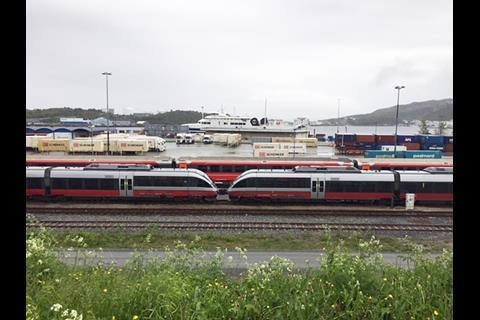 The contract covers long-distance passenger services on the Dovrebanen and Nordlandsbanen routes from Oslo to Trondheim and Bodø, as well as the Rørosbanen, Raumabanen, Trønderbanen, Meråkerbanen and Saltenpendelen regional services. It is expected to be signed at the end of June, subject to no objection being received in the 10-day standstill period, and would run for 10 years from June 7 2020.

SJ Norge beat a rival bid from state incumbent Vy Tog. Jernbanedirektoratet director Kirsti Slotsvik said the agency was pleased that the competition had attracted two strong bids, albeit fewer bids than the Lot 1 Sør contract awarded to Go-Ahead in 2018 after a three-way competition.

The agency said the Lot 2 competition was ‘tight and even’, with both bids being lower than the fees currently paid by the state. Vy’s proposal had been ranked slightly higher for quality, but SJ’s bid was ‘clearly’ the best in terms of price and provided the best price to quality ratio.

The contract is designed to ensure that services are ‘at least as good as today’, the agency said. Changes will include low-cost and dynamically-priced tickets, upgraded catering, better mobile phone signals, improved accessibility, defibrillators on all trains, reopening a workshop in Bodø, and a premium offer with at-seat breakfasts and access to lounges in Oslo and Trondheim.

The contract will include performance-based bonuses for the operator, and options which the agency would be able to exercise for enhancements including an increase in train frequencies.

Services will be operated using vehicles leased from state-owned rolling stock company Norske Tog, and the contract will offer bonuses for the use of zero-emission traction on routes which are currently operated using diesels.

Staff will transfer to the new operator with their current terms, and all operators in Norway are required to enter into a ticket retailing agreement with the Ministry of Transport’s operator-neutral Entur business to ensure that passengers can purchase tickets for all services.

SJ Norge Chair Berit Kjøll said the company was ‘incredibly proud’ to win the contract, which showed its strengths in digitisation and improving the passenger experience. It aims to ‘simplify and improve the entire journey’, and also has ambitions to operate trains in other regions of Norway.

Congratulating SJ on the win, Vy Tog director Arne Fosen said the state incumbent was ‘very disappointed’ to be losing seven long-distance routes, and would be assessing the reasons given by the agency. Fosen said Vy had improved its working methods and streamlined its organisation, which he hoped would help with its bid for the Lot 3 contract covering services in the west which will be the next to be awarded.