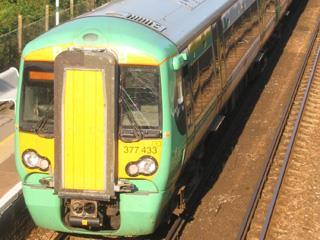 Production is due commence at Bombardier's Derby plant in the second half of 2012.

'Following a competitive tender process, we found that the Bombardier bid could meet our challenging delivery timetable, was affordable and also offered compatibility with our existing fleet', said Southern Managing Director Chris Burchell. 'We are delighted that we have found a way forward that will enable us to provide vitally needed extra capacity for so many of our passengers'.

The additional vehicles will enable Southern to lengthen suburban services into London Victoria from December 2013, including those operating via Gipsy Hill, Norbury and Hackbridge.

A financial competition is being held early in 2012 to provide capital funding for the new trains; a £80m contribution from the Department of Transport was announced in the Chancellor's Autumn Statement last November.

The vehicles are owned by Porterbrook Leasing which is investing £42m in the programme. Modification and refurbishment work will be undertaken by Alstom and Wabtec Rail, with the five-car EMUs due to enter service between May 2013 and July 2014.

Redeployment of existing rolling stock will enable longer-distance SWT services from Portsmouth, Southampton and Alton to London to be lengthened. The programme also includes bringing Platform 20 at London Waterloo, disused since Eurostar services moved to St Pancras station in 2007, back into use for domestic services from 2014.