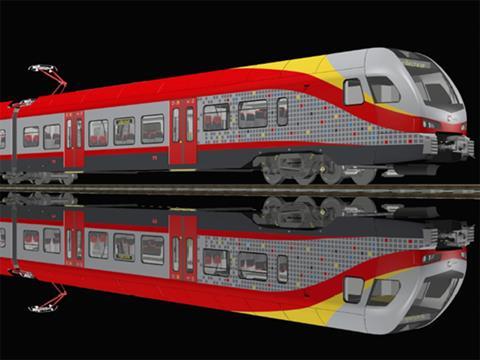 POLAND: Stadler Rail has been awarded a contract to supply 20 two-car Flirt electric multiple-units to Łódzka Kolej Aglomeracyjna, a voivodship-owned company which is to take over the operation of services around the city of Łódź next year.

EU sources are meeting 59% of the cost of the LKA project, which includes infrastructure and station upgrading works.

The SFr180m train contract which Stadler announced on December 13 includes 15 years of maintenance. This is to be undertaken at a 64m zloty depot which Karmar and Tor-Kar-SSon are to build at Łódź Widzew.

The EMUs are to be assembled at Stadler's Siedlce plant, with components including bogies supplied from Switzerland. They will have a top speed of 160 km/h, air-conditioning and accessible toilets.

The first six Flirts are scheduled to be delivered in spring 2014, with last following within a year. They will join a fleet of refurbished EN57 EMUs which is to be used to launch LKA services.