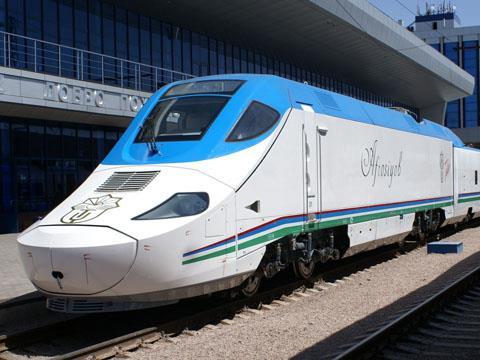 UZBEKISTAN: The first of two Talgo 250 trainsets ordered to cut journey times on the 344 km Toshkent - Samarkand route from 3½ h to 2 h arrived in Toshkent on July 22, with the second due to follow in September.

The trainsets have been given the name 'Afrosiyob'. Each comprises two power cars, eight passenger vehicles and a dining car, with a total of 257 seats in three classes.

Their design speed is 250 km/h, and state railway UTY has upgraded track, 25 kV AC electrification and signalling between Toshkent and Samarkand to permit fast running. This has included modernisation of the 59 km between Jizzax and Dashtobod, 34 km of double tracking from Dashtobod to Yangiyer, installation of swing-nose turnouts, level crossing upgrades, fencing the track and station modernisation works.

Procurement of the trains was approved by the government in January 2009, and UTY signed the €38m contract on November 25 of that year. Half of the cost is being met from UTY's resources and half from the Fund for Reconstruction & Development of Uzbekistan

Talgo will support the maintenance of the trains for a 51 month warranty period, and has been training UTY staff in Spain in conjunction with RENFE.