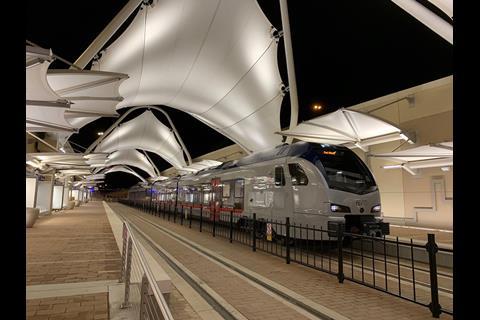 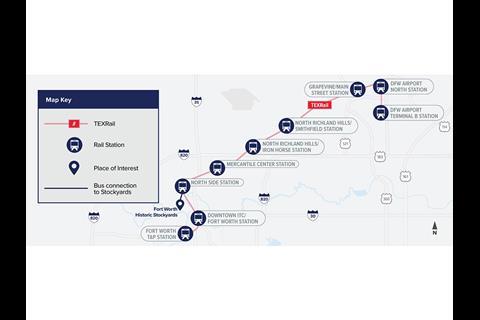 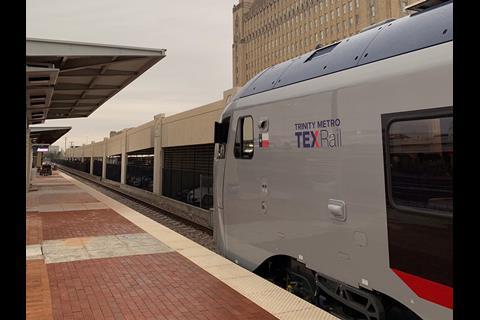 USA: The 43 km TEX Rail commuter line linking central Fort Worth with Dallas/Fort Worth International Airport opened on January 10, when the first train left North Side station at 03.38.

The line developed by regional transport authority Trinity Metro starts at the Texas & Pacific Station in Fort Worth and follows existing freight railway alignments through northeast Tarrant County, North Richland Hills and Grapevine, then a new alignment to reach Terminal B at the airport.

There are nine stations, including two existing stations in Fort Worth shared with the Trinity Railway Express service and two stations within the boundary of the airport. The terminus at Terminal B was funded by the airport.

The launch of services had been scheduled for January 5, but was postponed the previous evening because a hardware installation problem with a signal required further testing to be undertaken before the Federal Railroad Administration would approved the use of the entire route.

Trains run hourly with a journey time of 52 min. Travel is free until February when a single fare of $2·50 will be introduced, with discounts available. Initial ridership is predicted to be 8 000 passengers/day by the end of the first year, growing to nearly 14 000 passengers/day by 2035.

The Fort Worth Transportation Authority (now Trinity Metro) board approved the TEX Rail project in August 2013, and an agreement to go ahead was signed with the Fort Worth & Western Railroad, Dallas Area Rapid Transit, Union Pacific and Amtrak in December 2015. The Federal Transit Administration provided a letter of no prejudice enabling the start of construction procurement activities in June 2016, and groundbreaking ceremonies were held at three locations on August 24 2016.

In December 2016 the FTA signed a $499·4m Capital Investment Grant agreement to meet about half the $1·03bn cost of the project.

Stadler has supplied a fleet of eight Flirt diesel multiple-units under a $100m contract awarded by in June 2015. This was the first US order for the Flirt family, and the first time Stadler had won a contract which included federal funding and was therefore subject to Buy America regulations requiring 60% of the contract value to be sourced in the USA. The aluminium bodyshells and bogies were produced in Switzerland, with final assembly taking place in North Salt Lake, Utah.

The 130 km/h DMUs meet FRA alternative vehicle technology requirements for use on lines shared with freight trains. They have two Deutz 520 kW diesel engines complying with EPA Tier 4 Final emission standards housed in a centre module. There are 224 seats with side tables and USB sockets, as well as an Americans with Disabilities Act compliant toilet.