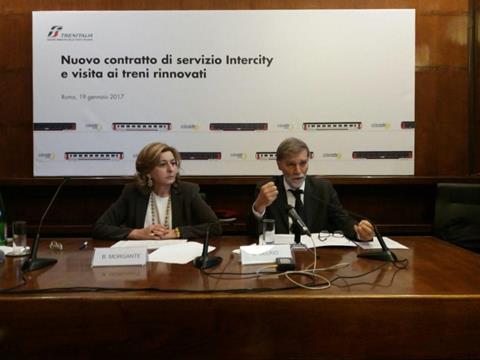 ITALY: A 10-year ‘universal service contract’ for Trenitalia to operate socially-desirable day and night inter-city services was signed on January 19. Awarded jointly by the Ministry of Infrastructure & Transport and the Ministry of Economy & Finance, the contract is backdated to January 1 and runs to December 31 2026.

Since the expiry of its previous agreement in 2014, Trenitalia has operated the inter-city trains under the same terms through two one-year extensions. However, despite carrying 12 million passengers a year, it found the revenue and support payments were insufficient to ensure financial sustainability. The national operator said up to 40% of the trains could have been withdrawn if it were forced to run them on a commercial basis.

Trenitalia says the 2017-26 contract will ensure that almost all services can be maintained, although the timetables will be adjusted to meet changing demand. The deal covers the operation of 88 daytime and 20 night trains, plus an extra 10 trains at weekends of which four run overnight. There will also be some feeder bus connections on routes where the traffic levels do not justify long-distance trains.

In total, Trentialia is expected to operate 25·1 million train-km per year, a 7% increase on the previous contract. The inter-city trains will serve more than 90% of the country, reaching all provincial capitals and providing effective connections to the high speed network. With ticket prices set in line with the universal service function, including 10% VAT, the trains are expected to generate an income of €348m in 2017, increasing to €366m in subsequent years.

Describing the 10-year deal as ‘unprecedented’, Trenitalia said the contract would focus on quality objectives such as punctuality, reliability and cleanliness, demanding a higher level of performance than its predecessor, and backed up by a penalty and reward scheme. Travelling cleaners are to be introduced, and some routes will have a minibar catering service.

Investment of €300m will support a gradual fleet renewal programme, with the introduction of a new livery for the day trains. Existing rolling stock will be refurbished by the end of 2017, with power sockets, new lighting, better toilets and more capacious luggage racks in both first and second class vehicles. More modern stock will be introduced, with the cascading of vehicles from the Frecciabianca services, helping to bring the average fleet age down from 25 to 15 years. There will be greater use of fixed formation push-pull sets to improve performance. All trains will be fitted with ETCS and new fire protection systems which are now legally required.

Trenitalia says it has already started making significant improvements to the night train vehicles, and this work will continue as funding permits.