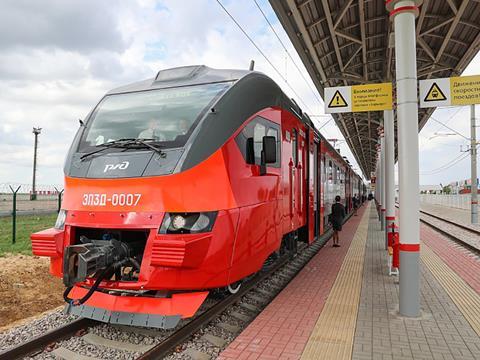 RUSSIA: Passenger services on the Volgograd airport rail link began on May 18, following an inauguration ceremony the previous day

Services use a 1·2 km branch which Russian Railways has built to connect Gumrak station with the airport passenger terminal, which has been rebuilt ready for when the city hosts football matches as part of the 2018 FIFA World Cup. The new station has a 176 m long island platform with a canopy and a covered walkway to the air terminal.

There are eight return services a day between the airport and Volgograd-I, the city’s main station, with a one-way journey time of between 32 and 36 minutes and a flat fare of 40 roubles for the approximately 24 km route. Trains continue beyond the main station to Shpalopropitka, taking 90 min to cover the full 12-station route.

An increase to 22 trains each way per day is planned, subject to the acquisition of more rolling stock.