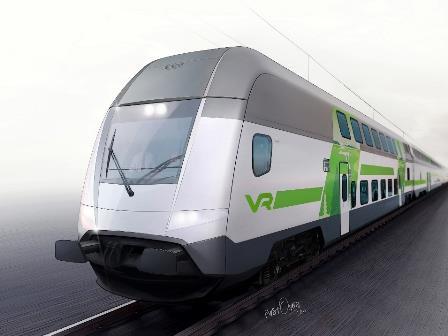 FINLAND: As part of its rolling stock renewal strategy, Finnish state-owned operator VR has ordered a build of special-purpose double-deck coaches to operate with its growing fleet of InterCity2 vehicles.

VR has ordered 12 driving coaches and 15 restaurant cars from Finnish supplier Transtech Oy for delivery in 2013-14. Valued at €90m, the contract includes options for a further 13 driving cars and 11 restaurant cars. They will be assembled at Transtech's Otanmäki works near Kajaani, and the manufacturer says each vehicle will have around 80% local content.

The 100-seat driving cars will allow VR to introduce pull-push operation on its inter-city routes, speeding reversal at termini and avoiding the need for locomotive changes. The double-deck restaurant cars are intended to enhance service quality, as at present InterCity2 formations only offer a limited trolley service. Each coach will have a full kitchen and seating for 50 passengers on the upper and lower decks and mezzanine area.

With the delivery of 20 sleeping cars just completed and another 40 coaches due to enter service between now and 2012, the latest order will bring VR’s total fleet of Otanmäki-built double-deck coaches to 219 vehicles.

Interior of the restaurant car