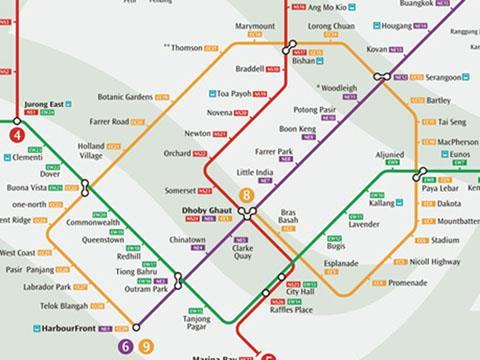 The S$6·7bn CCL is being built in five phases, which will form a 33·3 km horseshoe from Dhoby Ghaut to HarbourFront. Six of the 29 stations will provide interchanges to the existing radial metro lines, improving inter-suburban journeys by enabling passengers to bypass the city centre.

The initial section of the CCL runs between Bartley and Marymount, with interchanges with the North-South Line at Bishan and the North East Line at Serangoon. The stations are fully accessible, and have been decorated by local artists as part of SMRT's Art in Transit programme. Three-car driverless Alstom Metropolis trains with a capacity of 931 passengers run every 3 to 8 min, with a top speed of 80 km/h.

SMRT is donating fares from the first 22 days of CCL operation to charity. The publicity campaign for the opening included a Circle Line Discovery preview day on May 23, with visitors encouraged to dress in the colours of their local station. '10-hour non-stop parties' will be held at two stations on May 30-31, commemorative first day covers have been issued with circular stamps, and a Circle Line peach and custard Danish pasty has been commissioned from bakers Breadtalk.