Mastermind of high speed steps down 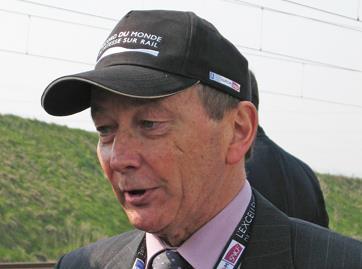 François Lacôte retired last year after an exceptional career in France’s rail industry. A graduate of the École Nationale des Ponts et Chaussées, he was responsible for Locomotives and Multiple-Units in SNCF’s Rolling Stock department before taking on responsibility for the TGV programme in 1982. He managed the development and procurement of several generations of TGV, including the double-deck Duplex design.
Lacôte helped to mastermind the world rail speed record in May 1990, when a TGV set attained 515·3 km/h on a section of LGV Atlantique. He later moved to Alstom Transport, where he was appointed to the Executive Committee in 2009 as Senior Vice-President and Technical Advisor to the President. He was instrumental in the achievement by the V150 trainset of the current world speed record for a steel-wheeled vehicle of 574·8 km/h on LGV Est in April 2007. Lacôte was also in charge of developing Alstom’s AGV high speed trainset with distributed power. He now lectures in railway engineering at a French university.