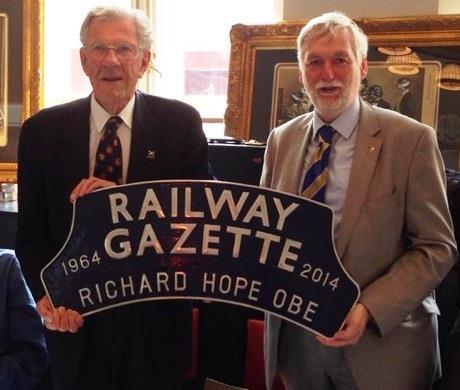 It is with great sadness that we have to report the death on October 14 of Richard Hope, at the age of 85, following several years of ill health. He worked for the Railway Gazette Group for 50 years, serving as Editor of Railway Gazette International between 1970 and 1991, and leading the magazine through an era of great change for the rail sector.

An electrical engineer by training, Richard Hope entered the rail industry in the late 1950s to work on the electrification of British Railways’ suburban routes from London Liverpool Street to Enfield, Chingford and Bishops Stortford. This was followed by a spell in Australia, where he assisted with construction of the Townsville – Mount Isa railway in Queensland.

Richard joined Tothill Press in 1964 as a Technical Writer for Railway Gazette, becoming Editor in 1970. Two years later, he was catapulted into the headlines, following the leaking to a national newspaper of a draft Railway Policy Review proposing the closure of around half of the UK rail network. This prompted a police raid on the magazine’s offices, visits to the homes of editorial staff and the interception of telephone calls, leading to questions being asked in Parliament about rail policy and the limits of press freedom.

Richard Hope travelled extensively during his career, visiting no less than 67 countries to report on railway developments around the world. Throughout this time, he campaigned vigorously against railway retrenchment in the face of road and air competition, believing that a more efficient rail sector had much to contribute to global prosperity and economic development.

After stepping down from the Editor’s chair, Richard continued to write for Railway Gazette International as Consultant Editor. He also contributed extensively to our UK newsletter Rail Business Intelligence, specialising in rail freight issues as well as infrastructure and engineering developments. He was awarded an OBE in 1991 for services to railway journalism.

Richard Hope was a leading commentator on railway policy and rail safety for national and international newspapers and broadcasters. He briefly served as a special advisor to the House of Commons Transport Select Committee, and also assisted Eurotunnel with the development of cross-Channel rail operations.

As well as his work for Railway Gazette, Richard Hope was an active volunteer on the world’s first preserved railway. He joined the Talyllyn Railway Preservation Society in 1955 and served as a member of the society’s Council from 1960 to 2002. He was Secretary of the society from 1966 to 1996, and a director of the railway’s holding company from 1996 to 2011, becoming TRPS President from 2006 to 2014.