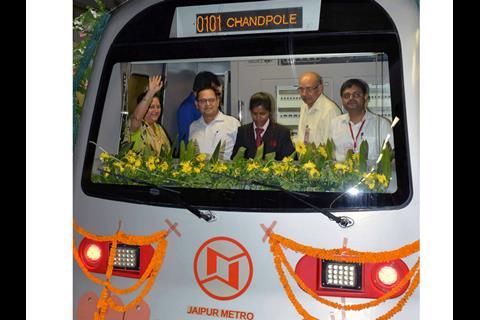 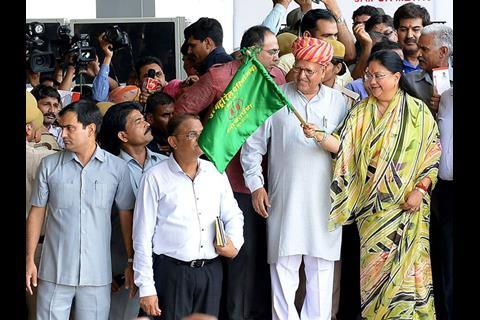 INDIA: Chief Minister of Rajasthan Vasundhara Raje flagged off the inaugural train to open the first phase of the Jaipur metro on June 3.

Public services began at 14.00. Trains will initially operate every 10 to 15 min from 06.45 to 21.00, with off-peak fares to be charged all day for a six month introductory period.

The Rs20bn Phase 1A of the metro runs for 9·6 km from Mansarovar to Chandpole. There are eight stations on the 9·1 km elevated section, and one on the 0·50 km underground section below the old city.

Construction began in February 2011 and made rapid progress as a result of strong political support for the project, the integration of project promoter Jaipur Metro Rail Cop with the city development authority and the appointment of experienced metro developer Delhi Metro Rail Corp as project manager. The use of road median strips minimised land acquisition problems, while the adoption of technical standards already in use on other metros enabled their supply chains to be used.

Equity and grant funding was provided by the national and state governments, and loans were obtained from banks and international bodies including JICA.

BEML has supplied a fleet of 10- four-car standard gauge 25 kV AC trainsets under a Rs3·18bn contract. These have a capacity of 1 034 passengers and a maximum speed of 80 km/h; their service speed will be 32 km/h.

Phase 1B is under construction and will extend the line by 2·3 km from Chandpole to Badi Chaupad, with two stations.