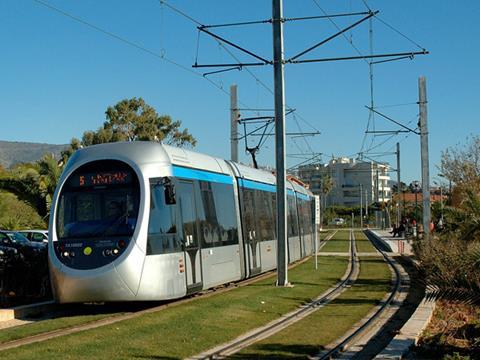 GREECE: After a delay of almost four years, the contract for the construction of a tram extension in Piraeus was signed on January 14 by Attiko Metro and contractor Themeli. The project is valued at €61·5m and is to be funded with EU structural funds.

The 5·4 km single-track line will run in a one-way loop through the centre of Piraeus to the port. It will start at Neo Faliro station, on Line 1 of the Athens metro, and run to Akti Posidonos, before returning to terminate at Peace & Friendship Stadium (SEF) near Neo Faliro. The journey time from Neo Faliro to Akri Posidonos will be 8 min. The extension will have 12 stops and is expected to carry 35 000 passengers per day.

Construction is scheduled from April 2013 to February 2015. Attiko Metro is due to call tenders for 25 new vehicles, for which it has budgeted €45m.

Further extensions are planned to Kallipoli (Stage B) and Keratsini and Perama (Stage C). In addition, metro Line 3 will be extended by 6·7 km to Piraeus. Studies are underway to extend other parts of the tram network: Elliniko to Argyroupoli, and Syntagma Square to Aigyptou Square and Patisia.