ARA emphasises the Value of Rail 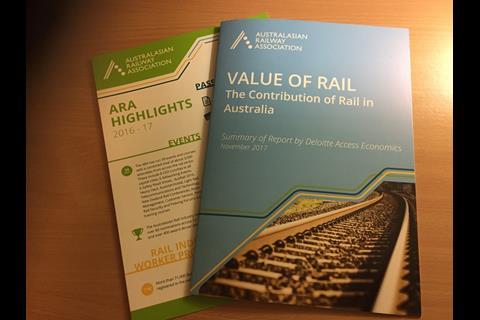 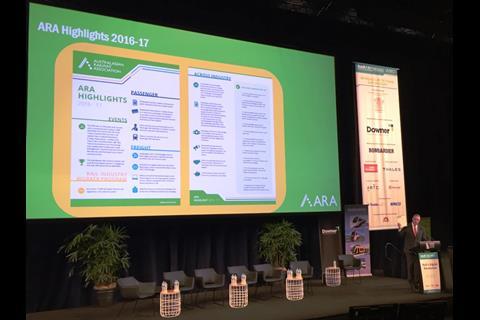 AUSRAIL: Australia’s rail industry contributed around A$26bn to the national economy in 2016, according to the Value of Rail report launched by the Australasian Railway Association at AusRail Plus on November 21.

Prepared for ARA by Deloitte Access Economics, the report is intended to highlight the many ways that rail supports the economy. It puts the direct economic contribution at A$13·3bn, made up of A$6·7bn in wages and A$6·6bn in capital returns. Another A$12·8bn is generated through indirect benefits. The rail sector supports more than 53 000 direct and around 89 000 indirect jobs across the country. In total, Deloitte estimates that rail supports 1·6% of the Australian economy and 1·4% of employment.

Noting that Australia had one of the world’s fastest growing populations, ARA Chief Executive Danny Broad pointed out to AusRail delegates that much of the increase was focused on the four main cities. ‘We know that Australia’s population increases at a rate of 370 000 people every year', he said. 'By 2060, both Sydney and Melbourne will have grown by approximately 3 million people each. And as the population increases, so too does congestion and the demand for improved transport.’

With the number of private motor vehicles in the country expected to double by 2050, ARA argues that Australia needs to develop a multimodal transport strategy putting rail at the heart of the mix, with both heavy rail and light rail in the cities and a greater market share for rail freight to support an efficient supply chain. It wants to see ‘a heavy vehicle pricing framework that accurately captures the cost of road infrastructure provision and the negative externalities of road usage, such as congestion, vehicle emission and accidents’.

The Value of Rail report includes a selection of case studies demonstrating the various ways in which rail could contribute more to the Australian economy. These include the long-planned Inland Rail freight corridor between Melbourne and Brisbane, the recently completed Regional Rail Link in Victoria, the Sydney Metro project now under construction and the short-haul freight shuttles moving intermodal traffic to and from Port Botany.

ARA has been consulting with the national and state governments over the benefits of its National Rail Industry Plan, which was launched in September to make the case for significant future investment. Broad said ‘the cost-benefit analysis is clear; rail makes a significant contribution to the Australian economy. We ask governments to get on board and implement our National Rail Industry Plan to provide the rail industry and the broader Australian community with long-term certainty of improved transport for the benefit of all.’