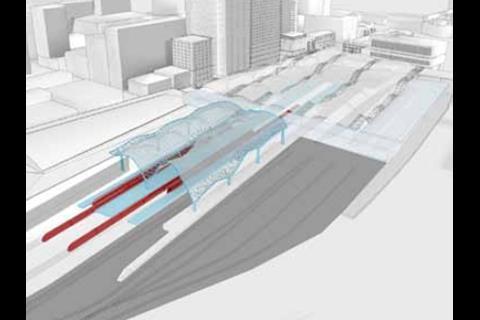 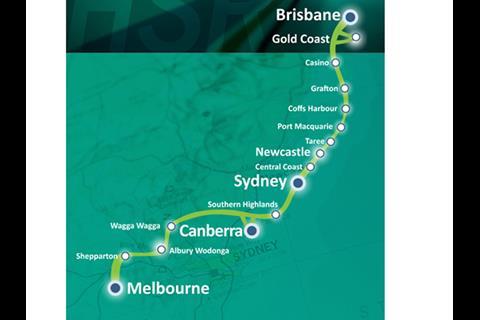 AUSTRALIA: What Minister for Infrastructure & Transport Anthony Albanese called 'the most detailed and comprehensive study ever undertaken into high speed rail in this country' was published on April 11.

The latest phase two study builds on an initial report released in August 2011, and was prepared for the federal government by a consortium led by AECOM and comprising Grimshaw Architects, KPMG, Sinclair Knight Merz, Acil Tasman, Booz & Co and Hyder.

The report presents estimated costs and benefits, and examines economic viability. The plan envisages 300 m trains carrying up to 780 passengers, with business and economy fares 'competitive with other transport modes'. Ridership could be around 84 million trips/year within 50 years, with at least 19 million trips between Sydney and Melbourne.

Albanese said he is 'firmly on the record as a supporter of high-speed rail' but 'starting from scratch to build our own system does pose a number of complex challenges'.

The route would require 144 km of tunnel, almost half of which would be through Sydney. Albanese said 'there is no doubt that this is an expensive exercise', with the construction cost put at A$114bn at current prices.

The route would be built in stages, spreading the cost and allowing revenue to be generated as sections open. The report says the optimal phasing would be to start with the Sydney - Canberra section, and then Canberra - Melbourne, Newcastle - Sydney, Brisbane - Gold Coast and Gold Coast - Newcastle following. Completion is envisaged for 2065.

The report concludes that financial returns from investing in construction would be insufficient to attract major private funding, and costs would have to be largely borne by government. However, if traffic projections are met the line could cover its operating and asset renewal costs. The overall return is put at A$2·30 for every dollar invested, which Albanese said 'is a reasonable return for transport projects'. Many of these benefits would derive from business travel between CBDs, with journey times of under 3 h from Sydney to Melbourne or Brisbane.

The report does not set government policy, but is intended to be a focus for public discussion and public feedback is now being sought. A subgroup of the Standing Council on Transport & Infrastructure is to co-ordinate federal and state approaches to protecting the alignment, and a high speed rail advisory group is to be set up.