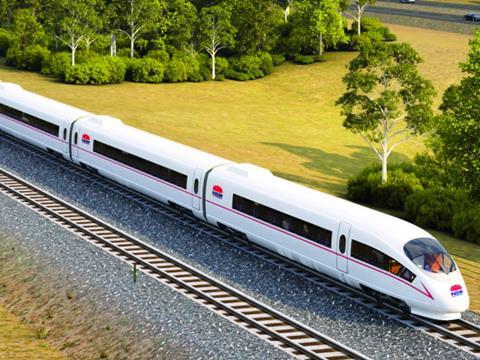 AUSTRALIA: The New South Wales state government has called tenders for studies and project management to support the development of business cases for faster rail services on the routes from Sydney to Canberra and Sydney to Newcastle.

The two routes were among four potential corridors identified for further investigation as part of the ‘fast rail future for NSW’ strategy announced by state premier Gladys Berejiklian in December 2018, although the final report of the study commissioned from Prof Andrew McNaughton has not yet been published. The other two routes would run from Sydney to Nowra via Wollongong, and to Orange via Lithgow.

The faster rail concept envisages trains operating at 160 to 200 km/h on upgraded conventional lines, rather than the construction of dedicated high speed infrastructure, as proposed for the Melbourne – Canberra – Sydney – Brisbane interstate corridor.

Transport for NSW is currently procuring a new fleet of EMUs for the electrified Sydney - Newcastle line, where upgrading of the route was designated as a priority project by the federal Infrastructure Australia agency in 2016. The state is also buying inter-regional diesel trainsets to replace the DMUs used on the Canberra service and its ageing XPT trainsets.

The federal government’s National Faster Rail Agency has identified Sydney – Newcastle as one of the schemes for which it will provide 50% of the funding for business case development, to be matched by either the state government or private promoters.

Both tenders are divided into two stages. The initial scoping phase would lead to the preparation of an interim report defining a ‘reference case’ for each route, based on a needs assessment, options development, and options assessment, as well as a strategic business case. Each scheme will also undergo a ‘health check’ by Infrastructure NSW, to provide a degree of confidence in the evidence provided.

The second phase covers the delivery of a final business case, building on the findings from the strategic business cases and the scoping phase. The government says the final business case will need to meet NSW Treasury requirements as well as the Fast Rail Programme objectives, which will require ‘consideration of wider economic and social impacts, alongside traditional transport benefits’.

‘The NSW government’s commitment to develop a blueprint for the delivery of a fast rail network is a major piece of state-shaping work’, explained Transport for NSW. ‘This transformative vision will seek to link regional centres to each other and Sydney.’