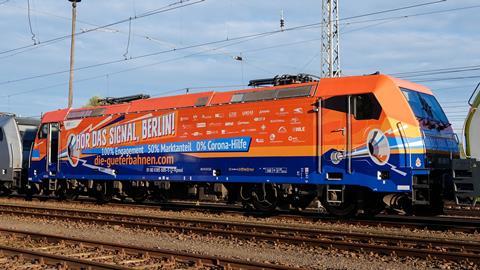 GERMANY: The Netzwerk Europäischer Eisenbahnen association of more than 25 independent freight operators arranged a special train through Berlin on September 28 to draw attention to the federal government’s failure to provide financial support for its member companies while offering compensation to state-owned Deutsche Bahn to deal with the effects of the Covid-19 pandemic.

Formed of 20 locomotives grossing 100 000 kW, the 400 m long train set out from Wustermark in westeren Berlin at 11.20. It was routed through the heart of the city, where, with horns blaring, it was well within earshot of the German parliament.

On departure from Wustermark, NEE Chief Executive Peter Westenberger called specifically for the federal government not to give DB Cargo preferential treatment, arguing that the planned capital injection for DB broke EU competition rules as ‘it allowed DB Cargo to price its competitors out of the market’. 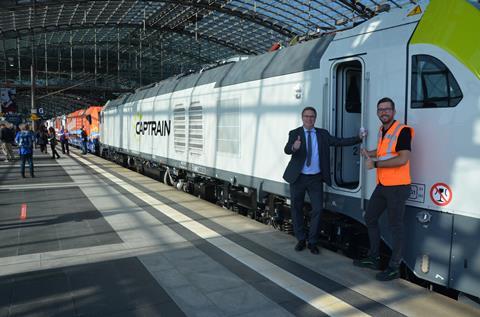 Travelling west to east along the Stadtbahn, the colourful train made a 15 min stop at Berlin Hauptbahnhof for photographs and speeches by Westenberger, Honorary Chairman of Mofair Wolfgang Meyer, Chief Operating Officer of TX Logistik Albert Bastius and other executives. 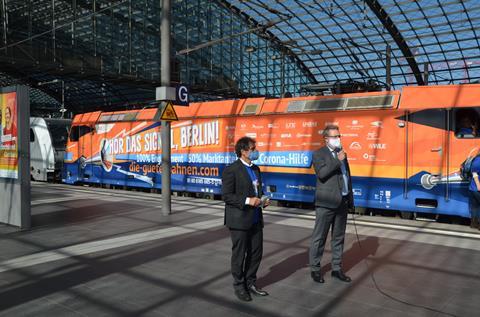 The train of locomotives then continued through Ostbahnhof bound for Grünau, where it reversed and returned via Neukölln, Südkreuz and Westkreuz to terminate at Westhafen at 14.00. Electric traction was used throughout, apart from one unelectrified section along Berlin’s southern ring where diesel power was required from one of the locomotives.

At Westhafen a 2 h programme of discussions involving leading figures from independent operators, transport experts and politicians had been arranged. 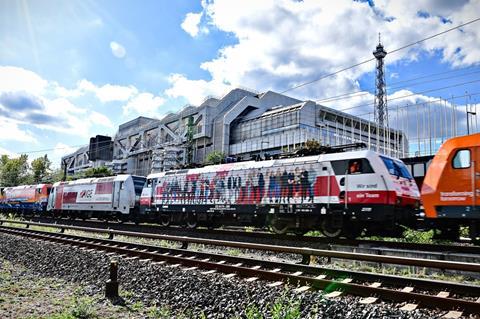 The stop at Hauptbahnhof was timed to start at 11.55, symbolising the precarious financial position of independent operators who had lost business during the pandemic. One of the locomotives was decked out in a special blue and orange livery that included the slogan: 100% Engagement, 50% Marktanteil (market share), 0% Corona-Hilfe (corona help).

Timing experts had scheduled the train so as to avoid disrupting any scheduled freight or passenger traffic.