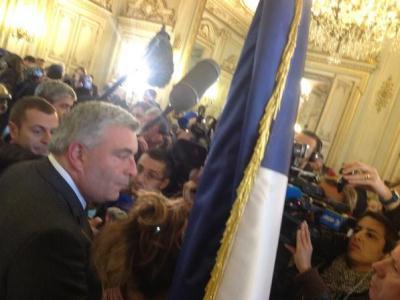 FRANCE: Speaking at celebrations in Paris on October 30 to mark the 75th anniversary of SNCF, Transport Minister Frédéric Cuvillier outlined his thinking on the forthcoming reform of the rail sector, following the ‘national debate’ held last year.

Structural reforms to create ‘a French model’ are explored in a position paper issued by the Ministry of Ecology, Sustainable Development & Energy, which identifies ‘four challenges, four objectives and four elements’.

The challenges reflect concerns already raised by Cuvillier, over service quality for passengers, a lack of long-term financial stability, a breakdown in the railway’s ‘social contract’ caused by rapid opening of the freight market to competition, and the sector’s readiness for future market liberalisation.

His response to the railway’s ‘repeated and endemic dysfunction’ centres on four ‘axes’ covering:

Among the concrete measures envisaged is the creation of a ‘single, unified infrastructure management entity’ which would encompass the current activities of RFF, SNCF Infra and DCF, the dispatching and traffic management authority.

This Groupement d’Infrastructure Unique would be complemented by ‘legacy operator’ SNCF at the heart of a ‘publicly-funded railway cluster compatible with European regulations’. This ‘cluster’ is intended to provide a greater degree of ‘cohesion’ between SNCF and the infrastructure manager, partly through sharing functions such as human resources and the harmonisation of working conditions for certain staff.

Recognising that European law requires clear and transparent demarcation of infrastructure maintenance costs and access rights to the network, the paper insists that the reforms ‘foresee the provision of guarantees necessary to comply with these directives’.

A national Network Code will be drafted to ‘improve the industry’s governance of the railway sector’, backed up by a new high-level supervisory committee. This will include representatives from GIU, train operators, STIF, regional governments that specify rail services, trade unions, passengers and the state.

It is envisaged that the government would sign multi-annual contracts outlining service requirements with both GIU and SNCF.

Amongst many other issues raised — including the need to maintain a nationwide approach to setting terms and conditions for railway staff to prevent ‘social dumping’ — the paper includes a cautious acceptance of more on-rail competition. Looking ahead to the fourth railway package, the ministry warns that ‘the development of future reforms in this area at a European level will necessitate substantial preparatory work to avoid repeating the problems experienced in the freight sector when the principal objective is to improve service quality for the greatest number of passengers’.

Whilst accepting France’s undisputed achievements in the field of high speed rail, the paper reiterates the need to improve passenger services for ‘daily users’, especially in Ile-de-France.

The ministry has already accepted the findings of a report by the Ecole Polytechnique Fédérale de Lausanne issued on October 15, which has been tracking how RFF is tackling a severe maintenance backlog on the conventional network.