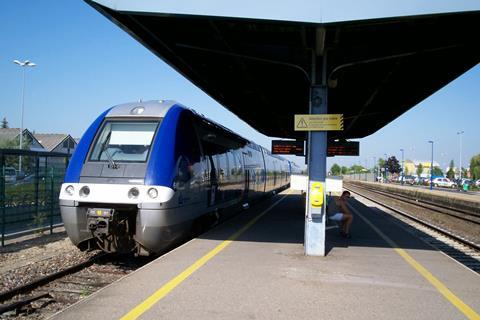 A TER service on the Strasbourg - Saint-Dié-des-Voges line calls at the junction with the Sélestat line at Molsheim. (Photo: Wikimedia/Eole99)

FRANCE: Passenger trains on the Saint-Dié-des-Vosges – Épinal line are expected to resume running in 2025 under plans unveiled by the Grand Est regional authority on July 29.

As part of a pilot programme to transfer responsibility for selected rural lines to local control, the region has invited expressions of interest for a €903m concession to reactivate the mothballed line and operate two regional services for up to 22 years.

The competitively-tendered Bruche-Piémont-Vosges package covers TER trains on the cross-country Strasbourg – Saint-Dié-des-Vosges – Épinal route running southwest from the Alsace capital and the branch which diverges at Molsheim and runs south to reconnect with the Strasbourg – Mulhouse main line at Sélestat, along with a range of feeder bus routes. 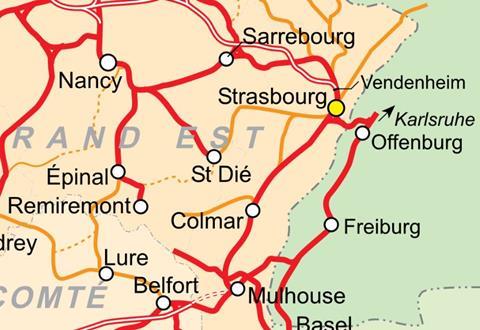 According to Grand Est, the current service on these two branches totals around 1·5 million train-km/year. SNCF Mobilités operates 650 000 train-km on the Strasbourg – Molsheim – Barr – Sélestat route and 200 000 train-km for short workings between Strasbourg and Molsheim. The Strasbourg – Molsheim – Saales – Saint-Dié-des-Vosges service accounts for another 650 000 train-km, but trains between Saint-Dié-des-Vosges, Arches and Épinal have been replaced by buses since December 2018 due to the condition of the infrastructure.

The region anticipates a service of between eight and 10 trains each way per day on the Épinal – St-Dié-des-Vosges section following reopening, adding another 260 000 train/km per year; some of these services would run through to or from Strasbourg.

The winning concessionaire will be expected to set up a new subsidiary to run the lines, with separate business units for infrastructure management and train operations. The latter would need to hold the necessary safety certification and operating licences.

The concessionaire will be responsible for financing and implementing the renovation of the mothballed Arches – St-Dié-des-Vosges section and for upgrading the rest of the route as far as Molsheim. It must also rehabilitate the Obernai – Sélestat section of the other line, and would then become responsible for infrastructure maintenance on both routes. Total cost of the work is estimated at €193m. 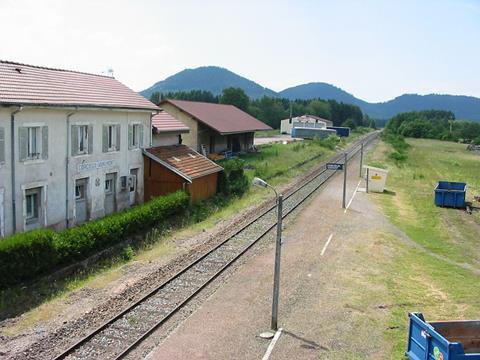 Services on the line between Saint-Dié-des-Vosges and Épinal have been suspended since December 2018 due to the condition of the infrastructure.

Other than the Épinal – Arches section, which will remain part of the SNCF Réseau network, the lines are not electrified. Services are worked by diesel multiple-units funded by Grand Est. The region expects to make the rolling stock available to the new operator, together with maintenance facilities, although it says that maintenance may initially need to be undertaken on a temporary basis at existing SNCF Mobilités depots.

The concessionaire will be responsible for passenger information and marketing, including the management of any stations not shared with other operators. The region will pay PSO support under a formula that reflects the level of ridership and revenue. As with the Nancy – Mirecourt – Vittel – Contrexéville line in Lorraine tendered last month, Grand Est says ticketing and fare collection would be the responsibility of a separate operator under a contract covering the entire regional rail network.

In line with French legislation, existing staff employed by SNCF on the routes would have the right to transfer to the new operator without the loss of their existing conditions of employment.

Expressions of interest are due by September 30, and Grand Est expects to issue an invitation to tender to shortlisted consortia in the first quarter of 2021 next year. Its aim is to select a preferred bidder by the beginning of 2023, allowing two years to complete the renovation ahead of reopening.

However, the region says the start date and the duration of the public service contract are ‘indicative’, and may be modified to reflect progress with the procurement. The planned 22-year duration is intended to allow the concessionaire to recoup the significant investment it must make in renovating the infrastructure. The train operating element may be split into an initial firm tranche and one or more optional extensions.