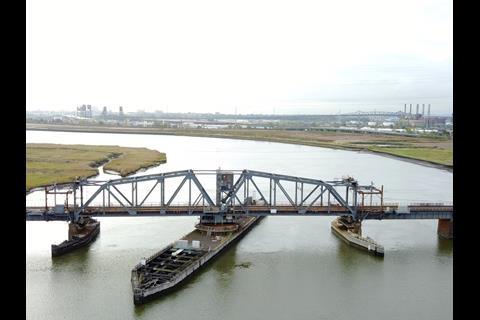 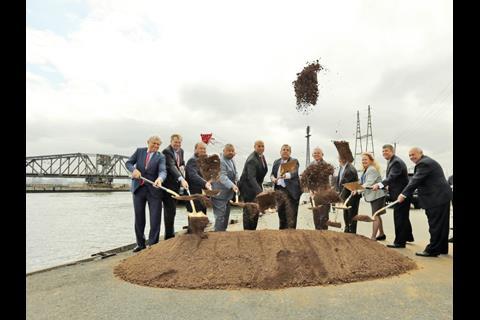 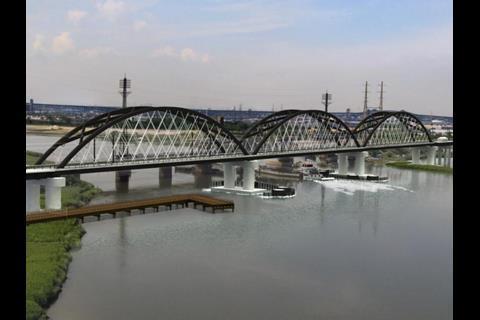 USA: New Jersey Governor Chris Christie and Amtrak Board Chairman Tony Coscia marked the start of work on the long-planned replacement of the Portal Bridge with a groundbreaking ceremony on October 13.

The 110-year old two-track swing bridge over the Hackensack River between Kearny and Seacaucus has long been a bottleneck on the busy Northeast Corridor between Newark, New Jersey, and New York City. It carries around 500 trains per day, of which Amtrak operates more than 100 and NJ Transit almost 400. Total ridership over the line is put at around 58 million passengers per year. However, the bridge has become increasingly unreliable in recent years, leading to significant disruption.

Proposals for replacement at a estimated cost of US$1·5bn were developed in 2013 under an engineering project funded by NJ Transit, Amtrak and the Federal Railroad Administration. The low-level swing span is be replaced by a fixed bridge 16 m above the water, providing sufficient clearance for shipping to pass without disrupting rail operations. Built using the network arch design, the new three-span structure will allow higher train speeds, while eliminating the opening span will increase line capacity.

NJ Transit and the federal Department of Transportation have provided funding for enabling works on the Portal North Bridge, for which contracts valued at $20m have already been awarded. These cover site preparation and utilities relocation. NJ Transit and the Port Authority of New York and New Jersey have arranged the local share of funding for the main works.

Construction of a parallel Portal South Bridge is expected to follow later, as part of the US$30bn Gateway programme to four-track this section of the Northeast Corridor.