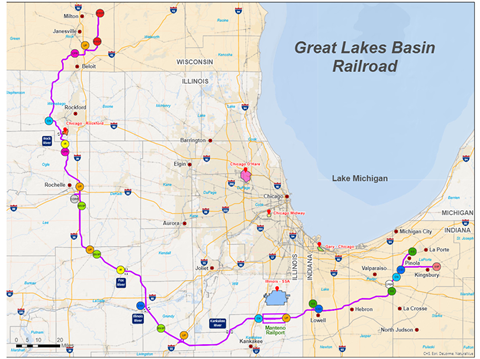 USA: Great Lakes Basin Transportation Inc filed a formal application with the Surface Transportation Board on May 1 seeking federal permission to build and operate a 420 km privately-financed railway to bypass the Chicago area.

GLBT estimates that 15% to 25% of rail traffic passing through Chicago does not originate or terminate there, and says the new route would raise network capacity by enabling through traffic to avoid the congested urban area.

The proposed route is designed link existing main lines while avoiding major population centres. It would start from a junction with the Norfolk Southern west of Pinola in northern Indiana, cross into Illinois then continue north along a completely grade separated route 60 km to 140 km from central Chicago to end at a connection with the Wisconsin & Southern Railroad east of Milton, Wisconsin. There would be branches lines totalling 26 km from Kingsbury to Westville and to connect with the City of Rochelle Railroad.

Most of the route would be double-track, with three tracks where demand is higher. It would be suitable for 110 km/h running, with Centralised Traffic Control and Positive Train Control providing capacity for up to 110 trains per day.

‘The Great Lakes Basin Railroad is the largest single freight railroad project proposed for the Chicago region in over a century’, said GLBT Chairman Frank Patton, who founded the company after a career in the software industry. ‘The privately-financed build programme will provide a new transpaortion belt to meet the growing and rapdly changing transportation demands of the 21st century.’

Financing is not yet in place for the project, which would cost at least $2·8bn and take 36 months to build. GLBT also envisages developing a toll road, and hopes to participate in Illinois Department for Transportation’s plans to develop a South Suburban Airport.