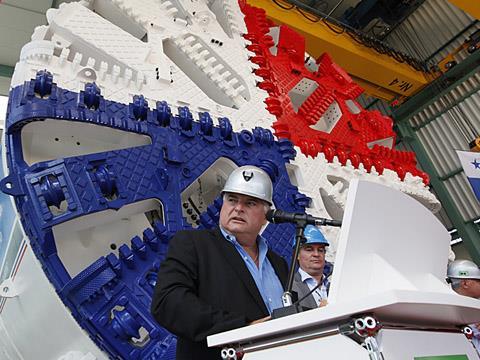 PANAMA: President Ricardo Martinelli has announced the start of tendering for Panamá City metro Line 2 saying 'we are going to transform the former transport chaos in Panamá into a safe, reliable system for all citizens'.

The president was speaking during a visit to Herrenknecht's tunnel boring machine plant in Germany on August 23, where he attended the official handover of two 9·77 m diameter earth pressure balance TBMs ordered for the construction of Line 1. Named Marta and Carolina, the TBMs are expected to arrive in Panamá in October and November.

The TBMs will be used to bore a 7 km tunnel between Albrook and Fernández de Córdoba as part of the US$1·4bn, 13-station Line 1, which is being built by the Línea Uno consortium of FCC and Odebrecht for completion by the end of 2013. Alstom is to supply 19 three-car trainsets for the 13·7 km route, along with power supply equipment and Urbalis CBTC signalling.