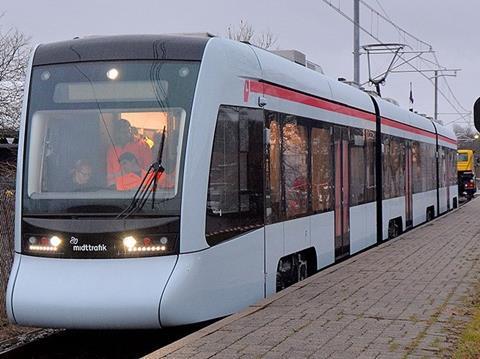 DENMARK: The first phase of the tram-train network being built in Aarhus is due to open on September 23, project promoter Aarhus Letbane announced on April 28. An initial service of three trams/h will run between Aarhus H and Universitetshospitalet.

Originally planned to open in June, the first phase will eventually see eight trams/h. Services will be extended south to Odder along an existing railway in early December, with the northern section to Grenaa due to open in early 2018.

When fully operational, the network would support a tram and a tram-train service, operated using two types of vehicles that Stadler is supplying under a contract signed in 2014.

Stadler delivered the first of 12 three-car Tango tram-trains from its Altenrhein factory in Switzerland in September 2016. The 39 m long vehicles will operate at up to 100 km/h between Odder and Grenaa.

Stadler is also supplying 14 three-section 32 m long Variobahn trams at its Velten site near Berlin. The 80 km/h vehicles would be used for tram services on the inner-city section of the network. The first arrived in Aarhus in June 2016. All 26 vehicles will be stabled at the same depot.