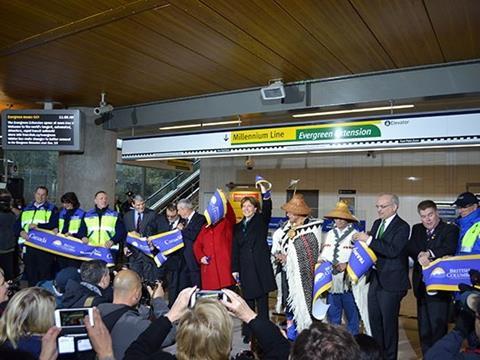 The 11 km extension runs east from Lougheed Town Centre to Lafarge Lake Douglas, serving six intermediate stations. Interchange with Westcoast Express commuter rail services is provided at Moody Centre and Coquitlam Centre. Bus services in the area are to be reconfigured to feed into the new stations from December 19.

The route uses a mix of at-grade, elevated and underground alignments, with trains running at up to 80 km/h to give a journey time of around 15 min. Running time for the entire Millennium Line from VCC-Clark to Lafarge Lake Douglas is 37 min. Ridership is expected to reach 70 000 passengers per day by 2021.

The C$1·43bn project includes a federal government contribution of C$424m, C$586m from British Columbia province and C$400m from operator TransLink.

TransLink has ordered seven four-car Innovia 300 trainsets from Bombardier for C$91m as part of the project. The first of the driverless trainsets entered passenger service on August 18 on the Expo Line. A vehicle storage and light maintenance facility has been built for the extension.