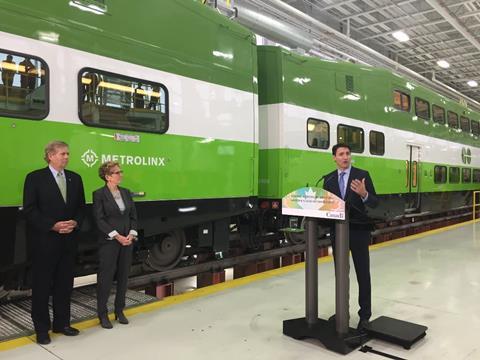 CANADA: Prime Minister Justin Trudeau announced on March 31 that the federal government is to provide C$1·8bn towards the GO Transit Regional Express Rail project being developed in the Greater Golden Horseshoe centred on Toronto.

The money is to come from the New Building Canada Fund, with the province of Ontario also contributing to the C$8·5bn project. According to the Prime Minister, this represents the single largest urban public transport project in which the federal government has ever invested‎.

‘Over the last few years the province has made significant progress towards modernising the entire GO network, allocating C$13·5bn towards GO RER and another C$7·8bn to upgrade and extend the GO network to include regular service to Niagara and Bowmanville’, said Premier of Ontario Kathleen Wynne. ‘At C$21·3bn, the GO capital programme is the largest commuter rail programme in Canada.’