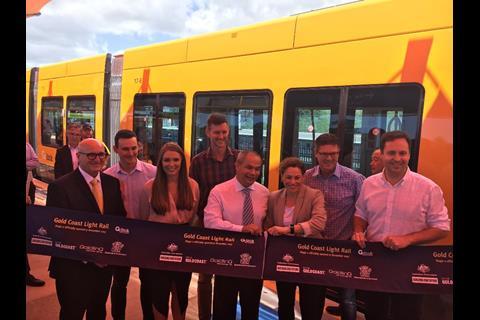 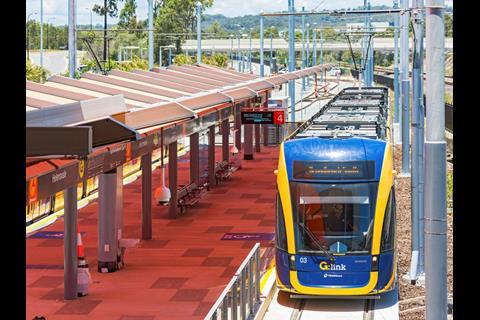 The 7·3 km extension adds three stops to the starter line serving the rapidly growing coastal resort in southeast Queensland's city. It connects the previously isolated light rail line to the Queensland Rail station at Helensvale where interchange is provided with trains to and from Brisbane.

The G:Link light rail project had been developed under a PPP backed by the federal and state governments, as well as the city and a consortium of private sector investors, through the GoldlinQ special purpose vehicle. GoldlinQ in turn awarded the operations and maintenance contract to Keolis Downer, with maintenance of the Flexity 2 low-floor cars subcontracted to their original manufacturer Bombardier.

The 13·0 km Stage 1 from Gold Coast University Hospital to Broadbeach South, through Southport and Surfers Paradise opened in July 2014. Since then, average ridership has grown steadily to around 22 000 passengers/day, with individual peaks of 50 000 to 60 000.

Stage 2 has been built as part of the preparations for the 2018 Commonwealth Games being held in Gold Coast, and has been funded by the state and federal governments. The main construction contract was awarded to CBP in April 2016, and four additional Flexity 2 trams ordered to augment the original 14. The last of the extra Wien-built cars was delivered in October, allowing Keolis Downer to launch a full ghost service on the extension from November 9.

The new link starts from the former underground terminus at GCUH and heads west beside Smith Street Motorway before turning to run north alongside the heavy rail line to Helensvale. Two intermediate stops have been built at Parkwood East and Parkwood, with passive provision for two more to serve future housing developments. The station at Helensvale has been expanded to cope with the anticipated Games crowds, which will also require bus shuttle connections to many of the sporting venues.