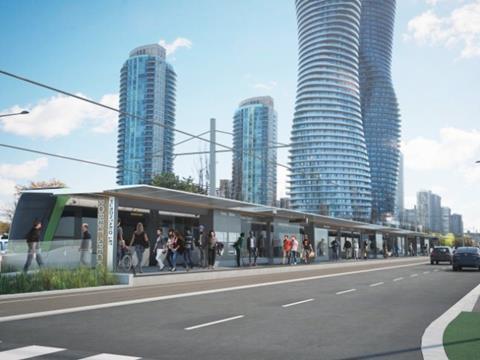 The 20 km line to the west of Toronto would run from Port Credit GO station in Mississauga to the Gateway Terminal at Steeles Avenue in Brampton. The 22 stops would include connections to GO Transit’s Milton and Lakeshore West commuter rail routes and local bus services.

Hurontario would be the first LRT project procured by Metrolinx and IO through a DBFOM contract. Responses to the RFQ will be evaluated for relevant experience and financial capacity, with pre-qualified teams then invited to respond to a request for proposals in spring 2017.

'People should be able to move around their cities quickly and efficiently, whether they drive a car, ride a bike, or rely on public transit', said Minister of Infrastructure Bob Chiarell on October 18. ‘The Hurontario LRT will improve on the options available to Mississauga and Brampton residents and visitors while increasing the quality of travel and life for everyone in the region.’