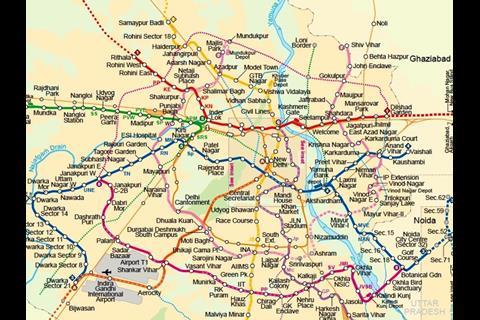 INDIA: The next phase of Delhi metro Line 7 was inaugurated on October 31. The elevated 17·9 km section between Shiv Vihar and Trilokpuri Sanjay Lake has 15 stations including three interchanges and a depot at Vinod Nagar.

The Shiv Vihar – Trilokpuri Sanjay Lake section is not yet connected to the rest of Line 7, which opened earlier this year in two phases between Majlis Park and Lajpat Nagar. The driverless Line 7, also known as the Pink Line, will eventually form a 58·4 km U-shaped route from Mukundpur to Shiv Vihar.

Trains on the isolated section will operate at 5 min headways at peak times, but a temporary section of single-line operation means that only one train in three can serve Trilokpuri pending completion of the missing link between Trilokpuri and Laipat Nagar. According to Delhi Metro Rail Corp, construction of this section has been delayed by land acquisition problems.

Opening of the new section takes the operational length of the Delhi metro network past the 300 km milestone, bringing the total to 314 route-km and 229 stations. Speaking at the inauguration ceremony, Minister of Housing & Urban Affairs Hardeep Singh Puri described the metro as 'a great success', noting that the first line had only opened as recently as 2002.