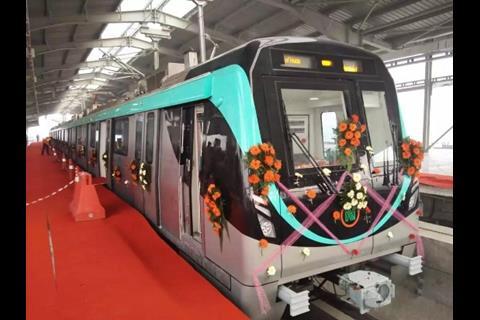 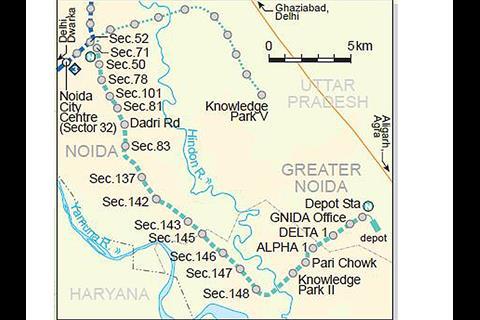 INDIA: The 29·7 km Aqua Line metro serving the Noida and Greater Noida districts to the east of Delhi was formally inaugurated on January 25 by the Chief Minister of Uttar Pradesh, Yogi Adityanath.

Authorised by the state government in October 2014 at an estimated cost of Rs50·6bn, the line has been developed by the Noida Metro Rail Corp special purpose vehicle. The state and national governments each contributed 20% of the cost, with the remainder raised from external sources. Running from Sector 71 to Depot, the Aqua Line serves 15 stations in Noida and six in Greater Noida. Interchange with the Delhi Metro Blue Line is provided at Sector 71, which is around 300 m walk from the Sector 52 terminus of Line 3.

The line is operated by a fleet of 19 four-car EMUs supplied by CRRC. These can carry around 1 000 passengers, and have wheelchair spaces in both driving vehicles. A consortium of Ansaldo STS and ZTE has supplied the signalling, train control and telecoms, offering ATO over CBTC using the technology adopted for Wuhan Line S1.

Describing the line as ‘a milestone in development of the region’, which would provide better connectivity, Adityanath said the Aqua Line had ‘been completed in record time’. The route had been expected to open in November 2018, but did not receive its final safety approval until December 21. Test running began on January 2.

On December 4, the Greater Noida Industrial Development Authority formally approved the 15 km second phase of the project, which will see the line extended eastwards from Sector 71 and then south to Knowledge Park V in Greater Noida. Serving nine more stations, the extension is expected to cost Rs26bn to build. Delhi metro Line 3 is also to be extended northward to Noida Electronic City in Sector 62, adding a further three stations.