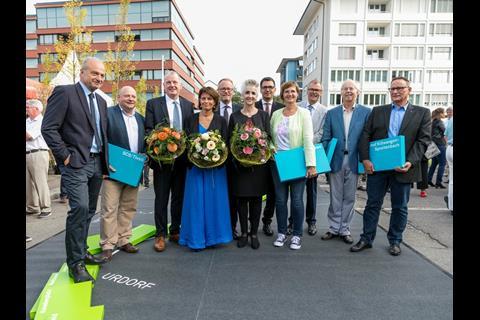 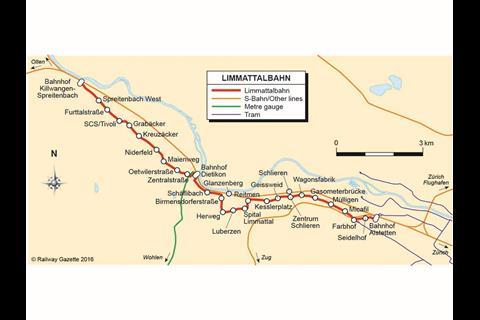 SWITZERLAND: President Doris Leuthard attended a groundbreaking ceremony for the Limmattalbahn light rail project at Schlieren near Zürich on August 28.

Preparatory work began on August 2 for the first phase of the route, which is due to open between Altstetten in Zürich and Geissweid in Schlieren to the west of the city. This is due to open at the end of 2019.

Work is planned to start on the second phase in autumn 2019. This would extend the Limmattalbahn to Killwangen-Spreitenbach, with opening envisaged at the end of 2022.

The entire 13·4 km metre-gauge route with 27 stops would run along existing roads. Around 92% of the route would be on reserved track, which would permit speeds up to 60 km/h.

A depot would be built on a 15 000 m2 site between the Limmattalbahn and the SBB marshalling yard between Dietikon and Killwangen-Spreitenbach, on the border of Zürich and Aargau cantons.

The new line is being developed by Limmattalbahn AG, which is jointly owned by the cantons of Zürich and Aargau. The two cantons are financing the project, with Zürich contributing the larger share. Around one-third of the SFr755m cost (excluding rolling stock) is being covered by the federal government.

BDWM Transport will operate the line for the first 10 years. Services will initially run every 15 min between 05.30 to 00.30. Frequencies could double if demand is high enough. From late summer 2019 VBZ’s tram route 2 is to be extended over the Limmattalbahn tracks from Altstetten Farbhof to Geissweid, running every 7½ min on this section.

The route will be electrified at 600 V DC between Altstetten and Schlieren for compatibility with the VBZ tram network. As the Limmattalbahn will share tracks with S-Bahn Line S17 on a short section in Dietikon, it will be electrified at 1·2 kV DC from Schlieren to Killwangen for compatibility with Line S17 between Dietikon and Wohlen, which is operated by BDWM Transport.