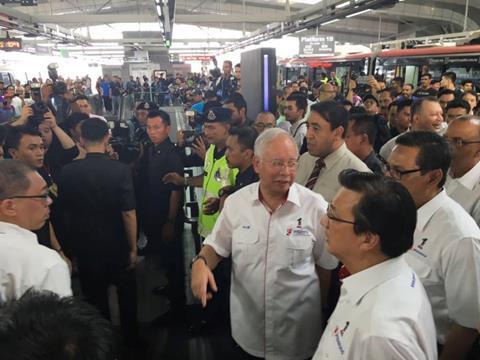 The Kelana Jaya Line has been extended southwest from Kelana Jaya to Putra Heights on a 17·4 km elevated alignment. All 13 stations on the extension have lifts, escalators, ramps and PRM-accessible toilets.

Construction started in 2011. The extension takes the Kelana Jaya Line to 46·4 km with 37 stations. Bombardier is supplying 14 four-car Innovia ART300 trainsets for the extension, which are due to enter revenue service early next year. Bombardier had earlier supplied a fleet of 35 two-car and 35 four-car Innovia ART200 trainsets for the driverless line.

Putra Heights is also served by the elevated Sri Petaling Line, which has been extended by 6·6 km from Bandar Puteri, with three stations. Together with previous extensions that opened in October and March, the original 27 km line has been lengthened by 18·6 km. Two more stations between Kinrara BK5 and Putra Heights are not yet open.