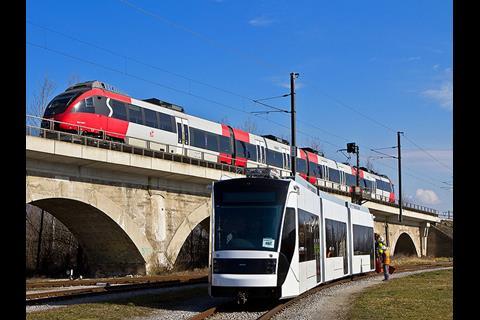 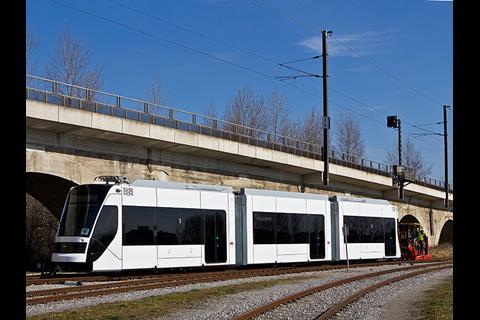 QATAR: Siemens' Simmering plant in Austria has completed the first of the Avenio light rail vehicles for the Education City People Mover System, an 11·5 km catenary-free tramway which is being built to serve the the Qatar Foundation for Education, Science & Community Development's education and research campus west of Doha. One of the trams is to undergo testing at the Rail Tec Arsenal climate chamber in Wien before delivery to Qatar.

According to construction contractor Habtoor Leighton Group, the line will be 'the first operating rail transport system in Qatar', providing free transport around Education City from multi-storey car parks around the premieter of the campus.

The 19 three-section 100% low-floor Siemens Avenio trams are 27·7 m long and 2 550 mm wide, with 60 seats and space for 162 standing passengers. They have powerful air-conditioning to cope with the local climate, and sunshades to protect the roof-mounted electrical equipment. According to the Qatar Foundation, the white livery and 'soft, natural interior colours' are intended to create a calm atmosphere.

To permit catenary-free operation the trams are fitted with Siemens' Sitras Hybrid Energy Storage units. These have double-layer capacitors which will be charged from overhead conductor rails at the stops, and a battery for storing energy regenerated during braking. Reflecting the pedestian and cyclist-focused nature of the campus, the maximum speed of the trams will be 40 km/h.

The tramway's design capacity is up to 3 300 passengers/direction/h, with 16 trams required for the planned 4 min interval peak service. There will be interchanges with the future Doha Metro at the Qatar National Convention Centre, Metropolitan Centre, and car parks on the eastern side of the campus. The tramway is also expected to carry football fans duing the 2022 FIFA World Cup.

The tramway is being built under a US$412m design, build operate and maintain contract which the Qatar Foundation awarded in July 2012 to the Siemens Tram Consortium of Siemens AG, Siemens WLL Qatar and Habtoor Leighton Group.

Siemens is providing the rolling stock, electrification, signalling, telecoms and depot equipment, as well as platform edge doors for four of the 25 stops. HLG's US$124m share of the contract includes responsbility for the construction of the stops, administration building, 10 500 m2 depot and around 15 km of Rheda City concrete and grassed track which is to be provided by subcontractor Rail.One. The route includes an 800 m viaduct with two elevated stops connecting Qatar National Convention Centre and Sidra Medical & Research Centre, while a tunnel will link campus facilities on either side of the Dukhan Highway.

A Hyder/Atkins joint venture was responsible for designing the network, and Astad is Qatar Foundation's project manager.

Opening was originally planned for September 2015, but this has been put back by a year.